Dignitaries from Israel and abroad fly in for Sunday’s rededication. 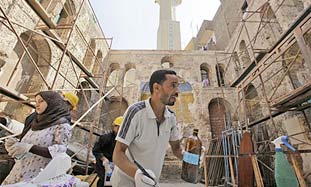 Photo by: APAfter a year-and-a-half of careful restoration work by the Egyptian authorities, the Maimonides Synagogue in Cairo is set to be rededicated on Sunday.

The 19th-century synagogue and adjacent yeshiva, which stand on the site where Rabbi Moses ben Maimon, the Rambam, worked and worshiped more than 800 years ago, was restored bythe Egyptian Supreme Council of Antiquities (SCA).

According to the Egyptian press, the restoration of the synagogue is part of a plan by the SCA to restore all the major religious sites in Egypt, including 10 synagogues.

The rededication ceremony will be attended by members of the Cairo Jewish community, the Egyptian diplomatic corps, former Israeli ambassadors and representatives of the state. A group of Chabad Hassidim will also attend the ceremony and help in rededicating thesynagogue.

Rabbi Andrew Baker, director of international Jewish affairs at the American Jewish Committee, is one of the people responsible for the renovation project. The initiative dates back five years, Baker told The Jerusalem Post.

“My initial reaction to the situation of the Jewish heritage sites in Egypt was not easy,” he said. “The authorities have protected the site from thieves and vandals by placing guards around them, but things were in a sorry condition.”

Baker said that over the past few years he went back and forth from the United States to Egypt and met with state officials to discuss the preservation and future of Egypt’s Jewish sites. Among thepeople he met were Culture Minister Farouk Hosny and SCA director Zahi Hawass. On other occasions he met with the foreign minister and some of the chief advisers to President Hosni Mubarak.

“The Egyptians were reluctant to form a formal partnership with us, but were willing to step forward themselves to do the restoration work,” Baker said. “They even endorsed our proposal that one of the restored synagogues should serve as a Museum of Egyptian Jewish Heritage.”

Upon taking on the task, the Egyptians proceeded to carefully renovate the Maimonides Synagogue, known to the community as Rav Moshe. Baker said that the Egyptians had transformed the structure from an earthquake-damaged, roofless and moldy wreck to a near picture-perfect replica of thesynagogue that was built in the 19th century.

“I was there in December and it was remarkable,” he said. “They restored it expertly according to old photographs.

“They dug a cistern under the building to drain up excess water that had flooded the yeshiva. They reinforced the ceiling with steel beams. They made new marble columns to replace old ones that had fallen to rubble. They even built a new ark for the Torah scrolls and carefully restored intricate artwork on the walls,” Baker said.

The cost of the renovation is estimated at between $1.5 million and $2m.

Baker said the Egyptians were cautious about highlighting their work on Jewish sites.

“The authorities are tentatively embracing Maimonides as part of their own heritage, but as in most places in the Middle East, Jew and Israeli are often equated and the conflict has a way of entering any discussion,” he said.

Former ambassador to Egypt Zvi Mazel and his wife flew to Cairo on Thursday to attend the event.

“Many of Egypt’s Jewish institutions are in bad shape,” said Mazel who was stationed in Cairo between 1996 and 2001. “The Jewishcommunity is very small and is not capable of preserving all the sites. Once there was a large Jewish population there but most people left in the 1950s.”

Mazel characterized the path to renovation as “entangled.”

“The Egyptians consider the synagogues and the ancient Torah scrolls as part of their heritage, but the fact of the matter is that they were built and purchased by the Jewishcommunity. I think it’s good that they conducted the renovations, but sad that they won’t let Israel be a part of it.

“There is a real fear in Egypt of the appearance of normalized relations, which reflects the prevalent anti-Semitism in the Arab world. If there is no dialogue on an issue like this, I think it’s a bad sign,” Mazel said.

Rabbi Yosef Hecht will be leading 12 men from the Chabad community in Eilat to take part in the rededication. Hecht said he had been to Cairo more than 20 times to pray and to close the cycle of readings of Maimonides’ Mishneh Torah.

“We were there when we prayed in a pile of rubble and it will be exciting to be there now that it’s restored,” Hecht said.

Some people believe that the synagogue and accompanying yeshiva have miraculous healing powers. The Rambam was a physician and it is believed that those who enter thesynagogue may be cured of illness.

In late February, a homemade bomb was thrown at the Ben-Ezra Synagogue, sometimes referred to as the El-Geniza Synagogue, in the heart of Cairo.

The land for this synagogue was purchased in 882 CE for 20,000 dinars by Abraham ibn Ezra of Jerusalem.

This was the synagogue whose geniza or store room was found in the 19th century to contain a treasure of abandoned Hebrew secular and sacred manuscripts. The collection, known as the Cairo Geniza, was brought to Cambridge, England, at the instigation of Solomon Schechter.

According to the police report, a man entered a hotel located on the fourth floor of a building across from the synagogue at around 3 a.m. and, as he was checking in, threw his suitcase out the window.

The case contained four containers of gasoline, each attached to a glass bottle of sulfuric acid meant to shatter on impact and ignite the makeshift bomb, said police, who speculated the man may have panicked.

The bag, which also contained clothes, cotton strips, matches and a lighter, fell onto the sidewalk in front of the hotel and briefly caught fire before being extinguished.

There were no injuries and no damage to the historic synagogue.

AP contributed to this report.