Ethiopian Jewry gets its first Haggada

Historic saga will be incorporated into mainstream Pessah story for first time. 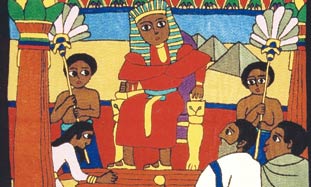 The historic saga of Ethiopian Jewry, with its unique traditions and customs, will be incorporated into the mainstream Pessah story for the first time in a new Haggada written by Ethiopian-Jewish history expert Rabbi Menachem Waldman.

Set to reach bookstores this weekend, the 195-page Haggada features prayers and commentaries on the story of the Jewish exodus from Egypt translated from Amharic into Hebrew, as well as an account of how Ethiopia’s Beta Israel community escaped to Israel first via Sudan in Operation Moses in 1984-85 and later during Operation Solomon in 1991.

“I have written many books about Ethiopian Jewry,” Waldman, director of the Shvut Am Institute and a frequent visitor to the East African country, told The Jerusalem Post Thursday. “But this is the first time that we are putting the story of the Ethiopian Jewish community onto our Seder table.”

The book, he said, is not aimed at the Ethiopian community per se, but is meant to demonstrate to the Israeli public that “the community has a very long and deep history that is firmly connected to Judaism.”

“Oftentimes we think that Ethiopian Jews arrived here with no connection to Judaism and we need to teach them how to be Jews,” continued Waldman, who is deeply involved in the fight to allow thousands of Falash Mura – Ethiopian Jews whose ancestors were forcibly converted to Christianity – to immigrate to Israel.

“However, they actually did come with a Jewish background,” he pointed out. “They celebrate Pessah in their own way. It’s different from the way we celebrate it, but it is still Pessah.”

According to Waldman, many versions of the standard Haggada are available in Amharic, translated in an attempt to include Ethiopian Jewry in reading the accepted text, but there is no recognition of the community’s own way of marking the festival.

Aviad Mozes, marketing director for Koren Publishers, which published the new Haggada, told the Post that the aim was “for Israelis to understand and recognize the traditions and history of Ethiopian Jewry.”