For Jewish Israelis of Yemenite Heritage, Reviving a Past At a recent henna celebration at the Yemeni Heritage Center in Rosh Ha’Ayin, Israel, the bride had three ensemble changes, each representing a city or region in Yemen. Although both the bride and groom were raised in Israel, honoring their Yemeni heritage was something important to them.

“I am Yemenite on both sides, and it’s a celebration of my wedding,” the bride, Meyrav Yehud, 24, said. “These are my roots.”

The henna ceremony, a pre-wedding event which has been a tradition in Asian, North African and Middle Eastern cultures, where women paint designs, or in this case place dye onto the skin of the bride and her guests, was held about a week before the wedding. In Yemen, the henna dye was believed to symbolize fertility; the deeper the color of the dye, the better it was for the woman. In some cases, they would apply it for days.

Bride Meyrav Yehud, 24, is covered with her veil as groom Or Dochan, 25 leads her in along the procession welcoming them into their Henna party.Published OnNov. 16, 2018CreditCreditMalin Fezehai/The New York Times

In a town that in the 1950s served as an immigrant transit camp for Jewish Yemenites, members gathered in an elaborately decorated venue outfit to echo traditional life in Yemen, complete with a fake well and photographs of the new Yemeni immigrants in Israel. The town was over 1,000 miles from Yemen’s capital city of Sana’a, which influenced the most striking look of the night: a tall cone-shaped headpiece, the tashbuk, traditionally made of pearls and flowers, accessorized with silver and gold jewelry.

It was “heavy and it hurts,” Ms. Yehud said. But she added, “It’s why you do the henna; it’s an experience.”

During the last few decades henna ceremonies have regained popularity in Israel’s Yemenite Jewish community, as an expression of pride in their heritage and traditions from Yemen. A culture and community is being formed again around the traditional aspects including the bride and groom’s garments, which are rare and costly — dresses with jewelry start at about $14,000.

The tradition of henna ceremonies was popular in Yemeni society, with Jews and Muslims sharing a common custom. In 1949, Jews from all over Yemen were airlifted to Israel in a yearlong effort known as Operation Magic Carpet. (Smaller numbers came earlier, pre-state, from the end of the 19th century, and in subsequent migrations.) Many tried to bring traditional bridal garments and jewelry, but because of their heavy weight, the majority of the items were left behind. During early years after the founding of the state, Jews emigrated from over 80 countries and from several ethnic groups, forging a new Israeli identity that was often favored over the languages and other aspects of diaspora identities. Mizrahi Jews from North African and Middle Eastern countries were often looked down upon by the Ashkenazi establishment and pressured to leave their diaspora culture behind, and thus, henna ceremonies became smaller and more discreet among the Jewish Yemenite community.

That changed somewhat in 1965 when the Israel Museum in Jerusalem featured an exhibit of a Jewish bride from Sana’a, Yemen. Showcasing the garment was significant because it honored a part of the diaspora culture. But it wasn’t until the late 1970s, as a result of a political shift in Israel, that people started talking about ethnic pride in Israel.

Dr. Carmella Abdar, a professor in Folk Culture at the Hebrew University in Jerusalem and Achva Academic College, said that in contemporary Israel, the headpiece is made in advance for the bride. But traditionally in Yemen, artisans would assemble the headpiece by hand on the bride herself, who couldn’t move for hours. 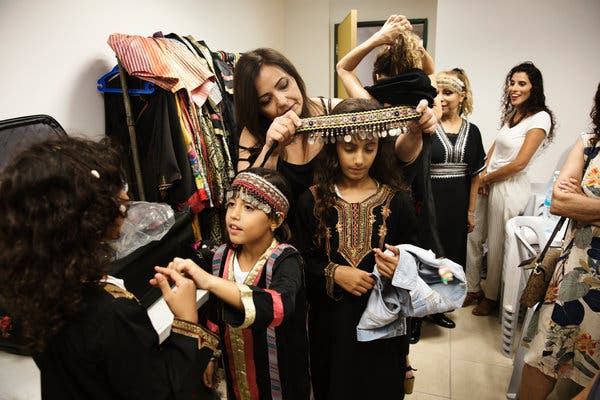 By the design of the dress, the bride takes the shape of a triangle. “The shape is very central in the material culture of Yemen,” Dr. Abdar said. Triangles symbolize the woman’s fertility and are believed to have supernatural powers, but she said that in modern Israel, the ceremony has more to do with “ethnic identity than magical powers.”

In Yemen, there were many similarities between Muslim and Jewish brides. The practice of dyeing hands and feet has been used for centuries in India, Pakistan, Africa and the Middle East; Jews adopted the tradition from their Muslim neighbors. Dr. Abdar said that Jewish jewelers in Yemen would make jewelry for both Muslims and Jews. They also added some distinctly Jewish touches, like the necklace-like labeh, worn below the chin, and stacked bracelets.

Yafa Yehuda, 58, a henna event planner who dressed the bride, sung at the event and decorated the space for Ms. Yehud’s celebration, said that henna ceremonies have become popular because young people wanted something different than a standard Israeli wedding and viewed previous generations with a sense of nostalgia. She began working as a henna dresser 15 years ago to bring those traditions to a new generation.

“Now I have no time to breathe because all day I am busy,” she said of the increase in ceremonies.

Ms. Yehuda sources many of the traditional materials she rents out in henna ceremonies like Ms. Yehud’s from Daniel Graydi, 30, a jeweler and henna dresser himself. Mr. Graydi is renowned in the community for authentic garments and jewelry, and creating elaborate Yemeni henna outfits. When he was 3 years old, he attended his sister’s henna ceremony and fell in love with the tradition.

“I was drawn to the colors, the beauty, to all the joy of it. It was something magnificent,” he said. 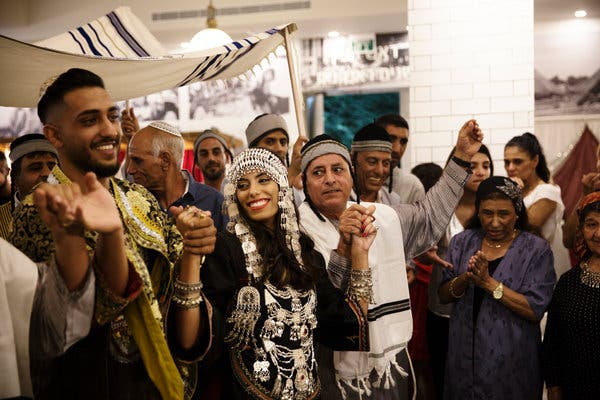 Mr. Graydi followed in the footsteps of his Yemenite grandmother, embroidering fabrics and dressing his friends. By the time he was 13, he and his mother had constructed a complete Yemeni henna outfit. Until the war in Yemen broke out about three years ago, he used authentic materials brought back from Yemen by a contact. Today, he sources fabric from India.

From left, the bride watches as her grandmother breaks down pieces of the henna plant into the bowl of already-made paste, held by Yafa Yehuda, the ceremony’s henna dresser and entertainer. 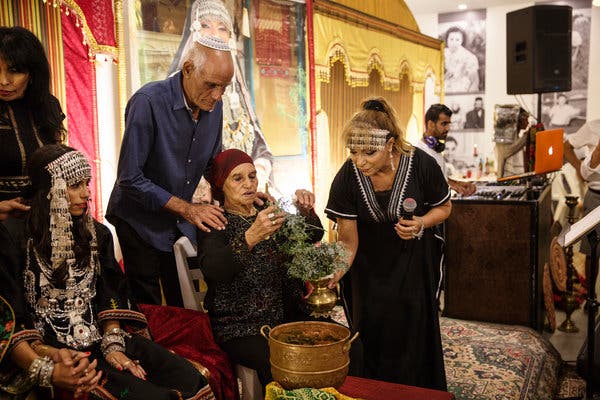 When the celebration officially begins in Rosh Ha’Ayin, the bride and groom stand below a talit, a Jewish prayer shawl, as they make their entrance. They are surrounded by a crew of entertainers who have adorned the celebration hall with symbols of old Yemen, and who are also dressed in costumes reminiscent of Yemeni clothes, even wearing fake payot or simonim, which are sidelocks, which were once the signature look of Yemeni Jewish men. One man blows the shofar, a ram’s horn, to further welcome the couple.

Toward the end of the evening, the immediate family gathers on stage, and guests watch as the henna paste is mixed, speeches are made and songs are sung to praise the bride. The bride applies the henna paste to the palms of her guests. Once dried and removed, the henna paste will leave an orange tint, showing that they have been to a celebration.