From slave to IDF officer: A Guinean’s story

At just 15 Avi Be’eri was sold to slave traders who smuggled him into Israel from Guinea, he managed to turn his life around and will now become an IDF officer

Avi Be’eri’s life story could have easily become a successful soap opera. It started with the death of his parents in Guinea, continued with slave traders smuggling him into Israel and through to the IDF officers course, which he is due to complete on Tuesday.

The 21-year old, whose real name is actually Ibrahim, was born in the city of Labe in Guinea. When he was a year old his father died of cancer and he and his mother moved in with his uncle. His mother always emphasized the importance of an education and even saved up money to send him to school. But when he was just 13 years old she died and he was left alone in the world.

Life in his uncle’s house was harsh and so he ran away to the local market, helping merchants in exchange for a place to sleep at night. One day he felt his luck was about to change, one of the merchants told him that in Israel it was possible to earn $3,000 a month. The merchant offered to pay for his air ticket in exchange for a percentage of Ibrahim’s monthly salary.

“I knew nothing about Israel,” he says in his fluent Hebrew. “I was an innocent kid and thought he really wanted to help me.”

Avi arrived in Cairo with just a small backpack and nothing else. The local contact was waiting for him. “There were eight of us Africans, he put us under a big blanket on a truck and drove off,” Avi recalls.

“The whole journey my mother’s voice was echoing in my head saying ‘they sold you into slavery’.” The journey to Israel was an ongoing hell. “At night we drove and throughout the day, Bedouins with guns watched over us. One night we arrived in Eilat and from there on to Tel Aviv.”

At Tel Aviv’s Central Bus Station he was left all alone. “I was 15, the only black guy among the white,” he said. “I noticed someone who was the same color as me and asked him where the migrant workers sleep.” Avi started working as a dishwasher and was told by other migrant workers to send a letter to the UN’s Refugee Committee in Jerusalem. 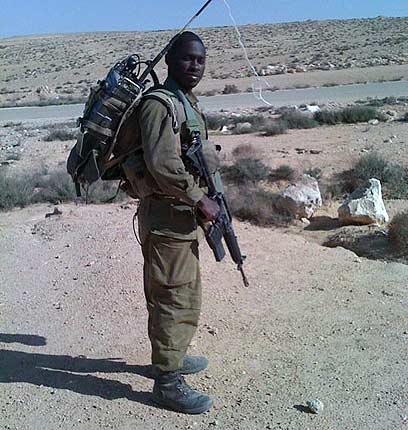 Avi Be’eri: I was an innocent kid (Photo: IDF Spokesperson)

Special Saviors
Their response was that he wasn’t eligible for refugee status as there was “no war in Guinea”. He was then sent to Tel Aviv’s Shanti House – a home for children at risk. “I had to escape to make money,” he remembers. “I knew that if I was deported back to Guinea without the money I owed the merchant who bought me the air ticket would butcher me.”

Yet just a short time after he arrived, Avi was arrested by immigration police. He was transferred to a holding facility as a deportation candidate. It seemed like his worst fears were about to come true.

Avi’s saviors were Susana and Azion Oshri from the communal settlement of Massad. They welcomed him into their home. Under their sponsorship Avi went back to school and appealed to the then Interior Minister over his status. The minister decided to offer the case special consideration and presented him with an Israeli citizenship.

When he received his identity card he changed his name to Avi – making it official. After completing his studies and receiving his high school diploma, Avi enlisted in the IDF.

On Tuesday he is set to complete his officers’ course and will then be promoted to the rank of Second Lieutenant. “I really do feel like someone who is making history,” he says with pride. “Who would have believed that I, who arrived in this country with nothing, sat in prison and was nearly deported, would become an IDF officer and serve at the IDF adjutancy helping Israelis integrate into the army?”

Avi already has big plans for his future. “I feel like every door is open to me and see myself as a Jew in every way. My next challenge is to convert, marry and start a family. I want to go to university and study International Relations and then work in the Foreign Ministry to promote Guinea-Israel relations. My dream is to contribute as much as I can to this country. There aren’t enough words to express my thanks.”