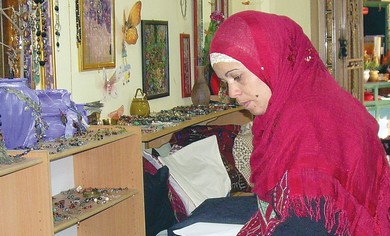 Jerusalem is a mosaic of diverse religious and ethnic communities, including small minorities that live largely separated to themselves. Nestled in the Old City and a few outlying neighborhoods are members of a unique non-Arab community that have much in common with the Jewish majority but have had trouble fitting into Israeli society. These are the hidden Gypsies of Jerusalem.

The Gypsy clans in Jerusalem tend to be reclusive, largely due to the relentless persecution they have faced during their long sojournings over the centuries. Thus, they normally shy away from any media attention, but The Christian Edition was recently granted access to this small, unseen community.

Even most Israelis are totally unaware of their presence.

“I didn’t even know there were Gypsies in Israel!” admitted Omri Kibiri, a Jewish lawyer who is now involved in advocating their cause.

For over 400 years, Jerusalem has been home to a few hundred families from the Middle East branch of Gypsies, known as the Domari. In the 1800s, they lived mainly in tents in the Wadi Joz neighborhood, just outside the ancient city walls. Over the past century, however, many gradually moved inside the Old City, to the Burj Laq Laq neighborhood (Alley of the Stork Tower), near the Lion’s Gate. Today, the Old City’s Domari community consists of about 150 families or 2,000 individuals, who live in low-standard housing.

Meanwhile, other local Domari families have resettled in Arab villages on the outskirts of Jerusalem and in Samaria and Gaza. By now, most have exchanged their tents for homes, albeit cramped ones. They usually live together with their extended family, which can include several generations under one roof.

Scholars have differing views about their origin. The old English term “Gypsy” (or “Gipsy”) suggests they originated in Egypt. Gypsies, however, are a distinct ethnic group whose various languages and dialects share a common origin – India.

Still, there are competing legends about their wandering past. One legend has it that in 227 CE the Gypsies moved from India into Persia, where they were mostly known as musicians and dancers.

Later Greek and Arab conquests resulted in several more migrations for the Gypsies, who broke off in two directions – towards Europe and the Middle East. Those in Western Europe are known today as the Rom or Romani, while those found in Eastern Europe and Armenia are called the Lom or Lomari. In the Middle East, they call themselves the Dom or Domari.

Today, the Gypsy world population is estimated at more than 40 million people.

Gypsies, like the Jewish people, are a unique example of an ethnic group that has been through long, difficult migrations around the world without losing their original identity and customs.

According to Anat Hoffman of the Jerusalem City Council, Jews and Gypsies also “share a common destiny, forged in the Nazi death camps of Europe.” Here she is referring to the stark fact that Hitler also sent large numbers of Gypsies from throughout Nazi-occupied Europe to the same extermination camps as the Jews, murdering an estimated 220,000 in the gas chambers. The Domari word for the Gypsy holocaust is Porrajmos, meaning the “devouring.”

Yet this common history of wanderings and persecution has not served to bond the local Gypsy community with the wider Israeli society. To most Jews here, they are considered part of Arab culture, as they mostly live among the Arab people. Meanwhile, the Arabs despise them even to the point of spitting on them and calling them nawar, meaning a failure or “dirt.” It is no wonder then that the Domari have found it hard to gain acceptance here.

In order to survive among the gadje (non-Gypsies), various Gypsy clans have traditionally tried to blend in by adopting the language and religion of their host country. In Israel, most Domari speak Arabic and some Hebrew. A few are also conversant in English. Domari, the Gypsy language, remains the spoken language by the older generation.

While many Domari call themselves Muslims, most are not religiously observant. Some local Domari have adopted Christianity.

The Domari are generally humble, peace-loving and do not seek political power. Historically, the Gypsies have no territorial ambitions and no nationalistic consciousness. They only desire to live quietly in peace and strive for a better future for their children.

In Israel, Domari are not recognized as a separate cultural or religious group like the Druze, Beduin, Samaritans or Armenians. Listed by the Interior Ministry as “Arab,” the Domari often find themselves at the bottom of the political pecking order. Even though they claim neutrality regarding the Arab-Israeli conflict, some inadvertently become involved as a result of living in Arab neighborhoods.

Most Domari couples have large families with six to 10 children, and they constantly struggle in the lower economic strata of society. Long-term consanguinity has resulted in genetic diseases. For this reason many Domari now seek to marry non-Gypsies. However, because Arabs typically refuse to let their children marry a Gypsy, many Domari remain single.

Most adults do not have any formal education. Consequently their unemployment rate is high. Domari children attending Arab schools are often harassed by fellow students and even their teachers. The shame of having no school supplies, books and the right clothes leads to a high dropout rate. As a result, many Domari children roam the streets, selling items to tourists or begging.

Young Domari girls often marry before they are 16 years old. Their fate is to have 8-10 children and live in poverty.

As a child, Amoun Sleem knew how it felt to be cold and hungry. Her widowed father did not have money to buy clothes or shoes for his nine children. An Arab teacher once made her stand in front of the class as he checked Amoun’s hair for lice. Her Arab classmates laughed whenever the teacher called her “nawari” (dirt).

Refusing to beg, Amoun chose to earn money by selling postcards. She soon realized that in order to have any future, she needed to finish school. Thanks to her iron will, she earned a diploma in business administration.

With no one else to pick them up, Amoun decided it was time to start helping her own people. She was determined to lift them out of the cycle of poverty and hopelessness. Confident that the deprivations and low self-image could be reversed, she encouraged the younger generation to complete their education and aspire to better jobs.

In 1999, Amoun established a nonprofit organization called the Domari Society of Gypsies in Jerusalem. With support from the Dom Research Center, a new community center was also opened in 2005 in Shuafat, near Jerusalem’s northern French Hill neighborhood.

Traditions die hard in conservative communities, and the Domari of Jerusalem are no exception. As an unmarried woman, Amoun still faces many challenges in her role as a prominent community leader. Living in a male-dominated society, it takes courage, determination and an eternal optimism for her to pull the Domari forward.

“We have to break the stereotypes of the Gypsies. They say we are a closed community that doesn’t welcome strangers. That’s not true! Gypsies will welcome anyone who comes to them and tries to help them,” said Amoun, whose name means “trust.”

Today, the Domari Society provides after-school tutoring and purchases school supplies for Domari children. In the community center, women learn different handicrafts and the sale of their products helps to improve their financial situation ever so slightly. The center also aims to advance Gypsy culture and education, maintain contact with Gypsy communities abroad and extend urgently needed social and medical services to local Domari families.