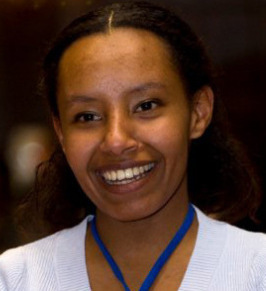 “In Ethiopian culture, you have to respect your elders,” said Aklile Kebede.

Visiting northern Israel from Boston in the mid-1990s, Nancy Kaufman encountered a scene that upset her deeply: 3,000 immigrant Ethiopian Jews languishing in a crowded, makeshift trailer camp on the outskirts of Haifa. Kaufman, the longtime executive director of the Jewish Community Relations Council of Greater Boston, felt driven to do something. After all, Boston-area Jews had supported the airlift of Ethiopian Jews to Israel in the 1984 famine, dubbed Operation Moses, and again in 1991 in Operation Solomon. And Boston has had a sister-city relationship with Haifa since 1989.

“We said, let’s create Haifa as model for all of Israel for integrating Ethiopian Jews,’’ Kaufman said.

Last week, two Ethiopian-born Israelis updated Boston-area Jewish groups on the transformation of their immigrant community, thanks in part to nonstop support from Boston Jews that now totals nearly $1 million a year to help Ethiopians in Haifa integrate into Israeli society.

“Haifa was the worst place for Ethiopians’’ in the early days, said Efraim Gavru, 23, an Israeli military officer. “But now our people who arrive in Israel are asking to go there.’’

The resulting support involved not just money but volunteer work by hundreds of Boston-area Jews with Ethiopians in schools, health clinics, and community centers in Haifa. Early successes spawned a more formal six-year project, now in its fifth year, that committed a total of $4.5 million from Boston’s Combined Jewish Philanthropies just for the Ethiopian support project in Haifa — called Shiluvim, Hebrew for “integration.’’

Ethiopian community members and Haifa residents fashioned a set of high-leverage programs. They put Ethiopian mediators in emergency rooms and schools to work with children and parents. They created literacy programs for hundreds of adults. They set up job-training programs, and day-care centers.

Aklile Kebede, who joined Gavru in Boston last week, said her family struggled to adapt when they arrived in Israel in 1993 from Ethiopia. Kebede, who was 6 when she got to Israel, tapped into the support programs in school, while her parents became involved in the adult programs to cope with the culture shock.

“In Ethiopian culture, you have to respect your elders. In Israel, you have chutzpah,’’ said Kebede, 23, now a second lieutenant in the Israeli Defense Force.

But with the help of the transition programs, “I was pretty Israeli in a short time,’’ she said with a smile. “Soon I had that chutzpah, too. And the whole Ethiopian community has been empowered.’’

That experience helps explain why the 7,000 Ethiopian Jews now living in Haifa have done better than elsewhere in Israel, said Vered Israely, the Haifa director of the Boston-Haifa Connection program. She offers data: Before the program, 40 percent of Ethiopian Jews in Haifa were employed. Now that number is up to 86 percent — while the national employment level among the 120,000 Ethiopian-born population is 57 percent.

“This is the only municipal program in Israel that cares specifically for Ethiopians,’’ Israely said.

Kebede’s father, Dr. Eshetu Kebede, is a leader of the Ethiopian community in Haifa and helped fashion the Shiluvim initiative. Her mother is a mediator at the Gavrieli School, a magnet school that many Ethiopians attend in Haifa. These mediators, funded by the Boston project, help students and their families deal with relocation issues.

Gavru, like Kebede, is a second lieutenant in the Israeli Army. They were among 12 Israeli military officers brought to Boston this week by the Boston-Haifa Connection.

Gavru and his family arrived in Haifa in 1997, when he was 9. He said one key to the Shiluvim program’s success is the way it works through the schools to involve the immigrant parents and elders, who often need more help than their children.

“The help you get is not only for the kids but also for the parents,’’ said Gavru. “The feeling is like the family — taking care of the elderly in the community. And you can see the results.’’

Ethiopian Jews are still arriving in Israel but at a slower pace. Israely said about 900 arrived last year, and of those Haifa recruited 140.

Kaufman said the effort acknowledged the hardships faced by many North African Jews arriving in Israel in its early days when the society was dominated by European Jews not always accepting of the African “Mizrahim.’’

“We quite frankly wanted to learn from the Mizrahi experience,’’ she said. “We didn’t want to create an underclass of Ethiopians in Israel.’’

Haifa has long since embraced it fully, and has steadily stepped up its financial support for the newcomers.

The city government had no Ethiopian employees a decade ago. Now it has 16, Kaufman said.

The key, she said, is involving Ethiopians fully in the planning. “It’s a transition from the patron model to the partner model.’’

James F. Smith writes about Boston’s global ties. His blog is at boston.com/worldlyboston. His e-mail is jsmith@globe.com.