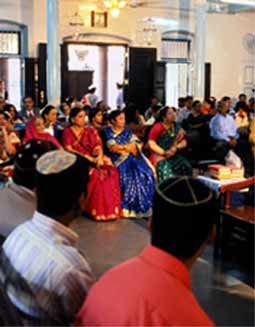 A Jewish religious ceremony in India

As told to Jacklyn C. Wadler

My career began working for a large company in Berlin as an expert in metals and minerals. I moved on to work for various other firms in Germany, then in Amsterdam and England. In the 1930’S the vile Nazi plans became all too clear and so I decided to accept a position far from their grasp – in India. Hence, in 1939, my wife, Hilda, and I left for the land that was to be our home for the next thirty years.

Immediately upon arriving in Calcutta (one of the major port cities), we began importing canned kosher meat from England. We then were delighted to learn of the existence of Jewish shochtim (ritual slaughterers), whose stalls were located opposite those of the Muslim slaughterers in the public market. This pleasant surprise was to be followed by many others, as we discovered the full gamut of Jewish life being observed in Calcutta.

The thriving, religious Jewish community in Calcutta numbered approximately 10,000. The majority of the community’s members were Sephardic Jews, primarily from Iraq, with a sprinkling of Syrian and Yemenite Jews. As Germans, we were among the small minority of Ashkenazim in the community.

Transplanting ourselves to this far corner of the world was to our relief, far easier than we had anticipated. We found that there was a Jewish Girls School, where Torah, Tanach, Hebrew, and other staples of Judaism were taught, by qualified instructors. There was also a Jewish Boys School, and had we had boys, they might have attended there. The Jewish “Ezra Hospital” was situated in close proximity, and although we intended, with G-d’s help, never to make use of the facilities, it was a comfort to know that kosher food was obtainable there.

As I settled into my new job, Hilda busied herself with the various Jewish organizations. Yes, in India we discovered a Jewish Social Club, a Jewish Women’s League, WIZO and a branch of the Jewish National Fund. At the Club, we were befriended by our new neighbors, who proceeded to unravel the fascinating history of Jews in India.

The Iraqi Jews’ ancestors of the previous century, were highly intelligent and thus were very successful in the fields of banking, industry and commerce. However, their empires were built on the opium trade. To us, perhaps this is shocking, but the Iraqi Jews of that time were involved in a very legal, and certainly lucrative industry. They had joined in the activity of the East India Corporation, established by the British Government.

Their children and grandchildren had the foresight to realize that the opium business was not secure for the future, and so they sent their own offspring to foreign countries, principally England, to be educated and trained in other fields. The money remaining in these families (notably the Sassoon Family), in addition to the fresh funds accrued by subsequent generations, has left present-day Iraqi Jews in India quite impressively wealthy. Among the monuments to the philanthropy and riches of these Jews is the Sassoon Library and the Sassoon Dock, both in Bombay.

Their wealth enabled these Jews to maintain a household run by cheap Moslem labor. Young Moslems would be taken into Jewish homes and taught the difference between ghee (literally, “melted butter”) and ghoash (meat). In addition they would be instructed in the preparation of traditional Jewish dishes, such as chamin. Derived from the Hebrew word chom – “hot,” this dish is the Sephardic equivalent of cholent, combining chicken, rice, hard-boiled eggs, and spices indigenous to India (especially curry), and cooked over a low flame until Shabbos lunch. They also learned to prepare a popular Shabbos dish that Indian Jews particularly prized: mahasha is any vegetable (though the use of onions, tomatoes, cabbage, cucumber and eggplant are the most common) stuffed with chicken and rice, spiced with salt, pepper, garlic, cloves, bay leaves, and tamirin (an Indian spice, in yellow powder form). However, the young Moslem’s training was not complete until he had been taught to make alumakala (literally, “jumping potatoes”). A delicacy ritually served on Friday night, alumakala is a dish of small potatoes, deep fried to a crisp shell, and spiced to one’s particular pallet. After having mastered these culinary arts, these Moslems became known as “Jewish Cooks.” Of course, their work was under the constant supervision of Jewish members of the household.

You may have noticed my omission of beef from our Sabbath cuisine. The Indian Government does not permit the slaughtering of cows, until they reach the age of fourteen. Then, only the Christians and Moslems partake, while the Jews do not eat any beef – out of respect to the Hindus, to whom the cow is sacred.

The relationship between the Jews and the Hindus is one of mutual respect and friendship. Jews are welcome to enter Hindu temples, though we much prefer our own shuls. One could choose from any of the three major synagogues in Calcutta: Magen David, Nir VaShalom or Bet El, or attend any of the four smaller ones. I am inclined to believe that the Hindus’ respect for Judaism dates very far back. The Magen David is considered by them to be a holy sign, and can be found on old Hindu houses and temples. Imagine my shock when I discovered the Hindus revered the swastika, as another symbol. These beliefs are still prevalent today, as is evidenced by a non-Jewish Indian firm’s trademark: a swastika inscribed in a Magen David. (What irony!)

Other evidence that the settlement of Jews in India dates far back, is the presence of numerous Jewish cemeteries. Travelling through villages in the north, I found quite a few tombstones with Hebrew writing, lying on the ground. Jews in India are buried with the traditional ritual, though the bodies are surrounded by cement, as a protection against wild animals. Outside the hilltop village of Darjeeling in the Himalayas, approximately 10,000 feet above sea level, on the way to Mount Everest, to my surprise, there too I found a Jewish cemetery.

The Jewish people have always enjoyed freedom in India. They are permitted to attend Indian schools and universities, and are not restricted in their business transactions or other career aspirations. General Jacob, an Indian-born professional soldier of religious Iraqi background, was considered a leading figure in the Bangladesh confrontation, in the 1970s.

A more contemporary example is that of Sir David Ezra and Lady Rachel Ezra, both descendants of the Sassoon Family. Knighted by the King of England, Sir David is the sheriff of Calcutta, and leader of the Jewish community. Mrs. Viva Laxmi Pandit, the aunt of Indirah Ghandi, used to be a frequent visitor at their home. Dignitaries were not the only guests welcome at the Ezra’s rambling compound, complete with a private zoo. At the Ezra’s Sabbath table, anywhere from 25 to 40 people could be found, and an open house policy was maintained by this true Aishes Chayil (woman of valor). Jewish soldiers stationed in India always had a place to go. Like a number of wealthy Jewish women, Lady Rachel did not make use of the public mikvah (ritual bath waters), as she had her own private mikvah,filled with collected rain water. She graciously offered her mikvah for use to the imminent brides and some select friends, my wife included.

Succos was another opportunity for Lady Rachel to perform the mitzvah of Hachnasas Orchim (hospitality to guests). Her succah was built to accommodate no less than forty people. We built our succah out of wood and bamboo, with palm leaves for schach (covering). Hilda and I have fond memories of one particularly unique Succos we spent vacationing in Darjeeling, located in the Himalayas, 8-10,000 feet above sea level, where we constructed a succah with these materials.

We always thanked Hashem for our ability to observe all the holidays properly, though there were naturally some adaptations of our traditional celebrations. The shofar used by the Sephardim is a long curling ram’s horn, not the short one we were accustomed to. On Purim, the graggers used were similar to ours, with the addition of a cymbal-like instrument, bells, and the old dependable foot-stomping.

Pesach was a tribute to our stamina and imagination. The people of the community would prepare hand-made matzos, using the oven in the shul, kept there for that specific purpose. Flour and sugar were taken from unopened sacks, and charoses was made with date juice, nuts and almonds. Since kosher margarine was non-existent, we used vanaspaty, a shortening made of pure coconut oil. Vanaspaty was used year round, as was coconut milk, in the preparation of parve desserts such as pudding and ice cream. In general, our kosher guidelines were not difficult to adapt to our surroundings, as the majority population of Hindus are vegetarians.

Over the thirty years that we spent in India, my work took me to such places as Bombay, Bangaloa, and New Delhi. It was in New Delhi that I was introduced to a group of Jews who called themselves “Bnei Yisrael.” They work in government and other service jobs, and speak in Indian dialect, as opposed to the Iraqi Jews who speak Arabic, Industani and English. The Bnei Yisrael dress as Indians, also contrasting the Iraqis, whose mode of dress is distinctly European. The Bnei Yisrael are not fully recognized by the other Jewish communities in India. They have their own synagogues, and an independent society. The main reason for this rift, is the Bnei Yisrael’s lack of observance of Jewish laws, particularly with regard to marriage. Having lived in India for centuries, the Bnei Yisrael group long ago claimed they were one of the Ten Lost Tribes.

Perhaps the most interesting Jewish community I came across in my travels is that of the port of Corchin, in the south of India. Their phenomenon of “White Jews” and “Black Jews” is uniquely intriguing. The “White Jews,” who originated frorn Spain and Portugal, came to India as traders and businessmen, at the time of the Marranos and Vasco DeGama. Low-caste Hindus became their slaves, and lived with the Jewish families for several generations. When the British abolished slavery at the end of the last century, the grandchildren and great-grandchildren of the original slaves converted to Judaism. After having been exposed to the beauty and charm of our religion for so long, how could they resist? Today, these “Black Jews” are fully observant, orthodox Jews, and are accepted as such by Jewish community.

Although our sojourn in India was pleasant, throughout the years we travelled abroad. Taking the Bombay/Calcutta Tehran – Tel Aviv flight, we were witness to the miraculous transformation Israel has undergone from 1949 to 1952-3 and after. From the reddish-brown earth covered with boulders, to the flourishing tropical sea of trees and other vegetation of later years, Israel has always had a profound effect upon us. It was in 1969 that we decided to finally come home. Although the feeling of camaraderie was prevalent in the Jewish communities in India, nothing can paralleled to the feeling of achdus (unity) that is ours living in a nation of Jews, and the fulfillment of living in a land that is our direct gift from the Divine.