The Baghdadis, a Jewish family in Aleppo, Syria, around 1940. In Aleppo, and in other cities and towns across north Africa and the Middle East, some 850,000 Jews were pushed out of their homes beginning in the mid-20th century. (Courtesy of Asher Ron)

Israel is marking on Monday its annual Memorial Day of the expulsion of some 850,000 Jews from Arab states and Iran.

At Sunday’s weekly cabinet meeting, Prime Minister Benjamin Netanyahu directed that there be an expansion of education on the heritage of Jews from Arab countries and Iran, and that consideration be given to a proposal to establish a Prime Minister’s Prize for academic research into the issue.

Hundreds of thousands of Jews were forced to flee Muslim countries in the years preceding and directly after the 1948 creation of the State of Israel. Known collectively as Mizrahi Jews, the community has gained political power in recent years alongside increased recognition of its members’ refugee status and celebration of their cultures.

The cabinet discussion preceded a UN discussion of the subject scheduled for Tuesday. Minister for Social Equality Gila Gamliel (Likud) was scheduled to fly to New York City to speak at the UN session.

“For years, more than a million Jews lived in flourishing communities and had a rich cultural life in Arab countries and in Iran,” Gamliel said Sunday. “Our goal now is to tell their story.”

Minister Aryeh Deri, who heads the Sephardi ultra-Orthodox Shas party and entered the Knesset after a campaign vowing to overturn decades-long discrimination against Jews of Mizrahi descent, demanded that the next two new banknotes produced by the Bank of Israel portray poets from eastern Jewish communities.

“The government must make a decision on banknotes and commemorate poets from communities in the east on the new notes the Bank of Israel is planning to issue. Commemorating the heritage of Jews from the East is still lacking and the children of Israel need to learn about poets and writers from eastern communities,” he said. 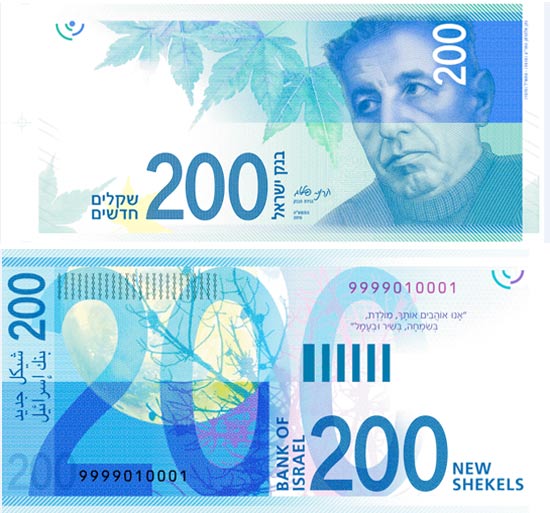 His comments were made less than two weeks after the Bank of Israel unveiled the new NIS 200 note. The bluish note bears the portrait of poet Nathan Alterman (1910-1970), an Ashkenazi Jew who was born in Warsaw, Poland.

A ceremony held Monday in Teddy Stadium in Jerusalem will be the main national commemoration event.

The commemoration was legislated in 2014 and the Memorial Day was first officially observed that year. The date, one day after the UN voted to approve the Jewish-Arab partition plan of Palestine on November 29, 1947, was chosen for its symbolic significance, evoking the pressure against Jews to leave their homelands amid the anger of the local Arab populaces over the vote.

Jews in Arab and Muslim countries started flocking to Israel before the establishment of the modern state but the number of refugees surged after 1947, mostly at the direction of the Arab League.

Flourishing communities from across the Middle East dwindled and in many cases disappeared completely.

Today Jews of eastern descent make up more than half of Israel’s population.

The Foreign Ministry will hold official commemorations through its branches around the world in an effort to increase international awareness of the subject, especially the rights of refugees to receive compensation for the property they left behind.

According to a report in Hebrew-language paper Israel Hayom, the official ceremonies held by Israeli delegations to various countries will strive to emphasize the fact that some 850,000 Jews escaped persecution in countries in the Arab Middle East, Iran, Turkey and Africa, a number exceeding the estimated 700,000 Palestinians who fled their homes in what became the State of Israel in 1948.

The Ministry for Social Equality has been documenting the revoked rights, stolen property and lost heritage of communities hailing from Arab countries and Iran since October 2009, before the commemoration was legislated.