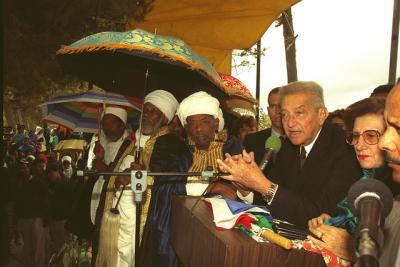 An Associated Press report in the Israeli daily Ha’aretz Jan. 18 notes that Israel’s rabbinate has taken the decision to phase out the traditional white-turbaned clergy of the Ethiopian Jews, known as the kessoch—whose “unusual religious practices are at odds with the rabbinate’s Orthodox Judaism.” The move has led to protests, controversy and a hunger strike. States AP:

The effort has added to the sense of discrimination felt by Israel’s 120,000 Ethiopian citizens. These sentiments boiled over this month after a group of landlords in the southern town of Kiryat Malachi refused to accept them as tenants, prompting a large rally planned for Wednesday across from Israel’s parliament.

The phasing out of the kessoch is particularly ironic, because their “unusual practices” may be closer to those of the ancient Hebrews than the Orthodox rabbis who are the assigned guardians of Jewish purity in Israel.

Descendants of the lost Israelite tribe of Dan, according to Jewish lore, Ethiopian Jews spent millennia isolated from the rest of the Jewish world. In most Jewish communities, the priesthood of the Bible was replaced by rabbis who emphasized text study and prayer. Ethiopia’s Jewish kessoch continued the traditions of Biblical-era priests, sacrificing animals and collecting the first fruits of the harvest.

The two traditions diverged so much that the first trickle of Ethiopian Jewish immigrants to Israel were asked to undergo a quickened conversion ceremony to appease rabbis who were dubious about their religious pedigree.

When Israeli clandestine operations rescued large groups of Ethiopian Jews from war and famine in the 1980s and early 1990s, a rabbinic consensus was reached and the newcomers did not have to convert – except for a group known as the Falash Mura, whose ancestors were forcibly converted to Christianity.

The 58 kessoch who arrived in Israel in those early days maintained their leadership role in the Ethiopian Jewish community, and in 1992 successfully lobbied the Israeli government to grant them salaries and status similar to those of government rabbis. But as the aging clergy began ordaining a new generation of kessoch over the past decade, and those new leaders also wanted recognition, Israel’s rabbinate objected.

The ministry would finally implement a 2010 government resolution to recognize 13 of them and give them state salaries. But Israel’s state rabbis made it very clear to the new kessoch: They would be the last.

A final ironic note to this sad story is that in searching for a Creative Commons photo to accompany our commentary, the best one we could find (above) is from the Israeli Government Press Office—showing white-turbaned kessoch being officially welcomed to Israel by President Ezer Wiesman in 1993.

The good news is that the Ethiopians plan to continue ordaining new kessoch—despite the fact that they will not be recognized by the rabbinate. “We kept this tradition for more than 2,500 years,” Jewish Ethiopian leader Kess Semai told AP. “Our community won’t allow in the span of 30 years for this tradition to be erased completely.”