Given the scope of Jewish history with all of its ancient traditions, it wasn’t all that long ago, that Judaism celebrated the first girl in modern times to become a bat mitzvah. It happened in America in 1922, when Rabbi Mordechai Kaplan, the founder of the Reconstructionist movement, arranged for his daughter, Judith, to become a bat mitzvah in a public synagogue ceremony. 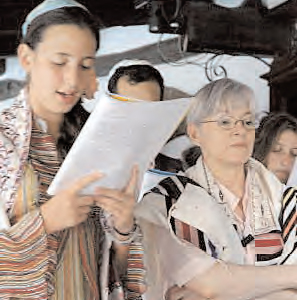 Today we make the assumption that the bat mitzvah moment actually happens when the young girl reads from the Torah scroll. This is an entirely logical belief, especially since girls now often assist the rabbi on the bima, lead prayers and blessings, and read Torah at a bat mitzvah, just as the boys have always done for a bar mitzvah. But for Judith Kaplan, our first American bat mitzvah, that wasn’t the case. Instead, history records that young Judith did not receive a full aliyah, which means that she did not make the blessings over the Torah reading or read directly from the scroll itself. And although her experience represented a monumental change in what had been described as patriarchal Judaism, Judith’s bat mitzvah ceremony was described as “a much diminished version of what the boys did.”

We now understand that the first American bat mitzvah resembled what Jewish girls in Italy had done for centuries. Back in the 1600s, girls stood before the open ark, recited a special prayer, received the rabbi’s blessing and then adjourned for the celebratory meal (known as a seudat mitzvah) held in the girl’s home. Some suggest that Rabbi Kaplan actually may have studied this ancient Italian ceremony and adapted it for his daughter’s rite.

Who knows? The bat mitzvah ceremony has its roots in early 17th century Italy, which makes it entirely appropriate that, as Jewish rituals evolve and change, five young women should become the very first in Italy to advance the ancient bat mitzvah tradition and read directly from the Torah scroll (known as the sefer Torah). 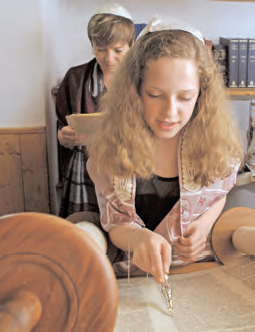 Because Miriam was the very first individual in the Torah to be called a prophet, I celebrated this feminist achievement by referring to the first five bat mitzvahs (in Hebrew, the plural of “bat mitzvah” is “b’not mitzvah“) as Italy’s symbolic “Five Books of Miriam” (a pun on the Five Books of Moses, a name for the Torah).

When I read Dr. Ellen Frankel’s wonderful book, The Five Books of Miriam, which represents the first Torah commentary from a woman’s point of view, I was encouraged. Frankel’s book has done much to advance the conversation between Jewish women and their Jewish traditions and these five young girls are Italy’s contribution to this important process.

It all began with Camila Sobral, also known by the Hebrew name Dina bat Miriam v’ Julio. Camila lives in Rome with her parents and two sisters and recalls the happy celebration when her older sister became bat mitzvah in Los Angeles, California. 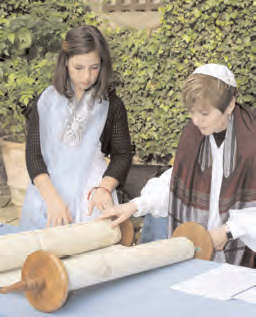 Camila remembered how her sister read from the Torah scroll and how much she looked forward to having the same experience. When her parents took her to Rome’s Tempio Maggiore, the Great Synagogue, which, like all of Italy’s synagogues, is Orthodox, Camila witnessed something entirely different from what she was expecting. “The girl came up to the bima,” says Camila, “but she didn’t read from the scroll. Instead, an older brother read from the Torah in her honor.” Camila’s mom recalls her daughter’s exact words that morning: “I’m not doing that!” This statement initiated the Sobral’s journey to create the egalitarian ceremony that, to mother and daughter, only seemed right.

On July 19, 2005, at a ceremony attended by friends and family from New York, Los Angeles, Brazil, Poland and Israel, Camila Sobral became the first girl in Italian history to be called to the Torah, to touch the Torah and to read directly from the Torah scroll.

Our bar and bat mitzvah program here in Italy is special in so many ways. Not only do our young women, along with our young men, read directly from the Torah, their families, especially those that are interfaith, experience the joy of fully participating in the synagogue service.

For Julio Sobral, father of Camila and Leila, this was especially important. Julio and Claudia shared equally in the responsibility for bat mitzvah preparation but more importantly, Julio fully supported the lifelong commitment Claudia made to create a Jewish home. 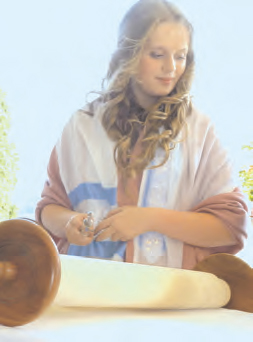 During his daughters’ bat mitzvah ceremonies, when the Torah was passed from generation to generation (“l’dor v’dor” in Hebrew), from grandparents to parents to daughters, Julio stood with Claudia for this important experience and with his wife, cradled the Torah scroll in his arms. In addition, Julio’s beloved mother was honored by presenting the Torah pointer, a beautiful silver yad, to her granddaughter.

In June of 2010, Charis Frieman-Mendel travelled with her family to Calabria, in the “toe” of the Italian “boot”, to Synagogue Ner Tamid del Sud, the first active synagogue in Calabria in 500 years since Inquisition times. There she became Italy’s second bat mitzvah in the modern tradition and the first girl in Calabria’s history to follow in Camila’s footsteps and read directly from the Torah scroll.

Leila Sobral, Camila’s younger sister, became bat mitzvah number three. Again in Rome and following her older sister’s lead, Leila studied with me long distance via Skype (free software that allows people to make voice and video calls over the internet). On May 22, 2010, Leila carried the Torah in procession (hakafah) through a crowd of more than one hundred friends and family and then opened the sacred scroll to read verses from her Torah portion, Parsha Naso.

Samantha Goldstein’s ceremony in the Calabria synagogue opened book number four of the “Five Books of Miriam.” Samantha, her parents, brothers and grandparents traveled from Florida to the deep south of Italy to experience Shabbat in Italian style. Making kiddush under the ancient grape arbor, complete with local wine and handmade challah bread, offered Samantha and her family an opportunity to experience Judaism in an isolated mountain community founded centuries ago by anousim — Jews who had escaped persecution during the Inquisition. 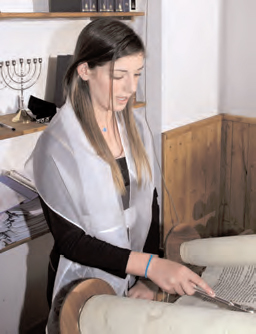 Then, June 18 2011 marked a first for Tuscany when Louisa Auerbach became the fifth girl in all of Italy and the first girl in Tuscany to become a Torah-reading bat mitzvah. Known in Hebrew as Aliza bat Ariel v’Yehuda, Louisa shares her Hebrew name with author Aliza Lavie whose landmark siddur, A Jewish Woman’s Prayer Book, has been translated into Italian and is used today in Italy. The book details the trials, challenges and joys of Jewish women throughout the centuries and the texts reflect an alternative model, based in the feminine experience. With Louisa’s ceremony, the Five Books of Miriam are complete.

Contemporary Jews have begun to reclaim Miriam as a model for biblical leadership. As (we) break Miriam’s silence and restore her memory as prophet and teacher, all of our songs are enriched and our people’s story becomes more whole.

As a woman rabbi in the modern tradition, I like to think that in memory and in honor of the prophet Miriam, Camila, Charis, Leila, Samantha and Louisa have accelerated the acceptance and the equality of women throughout Italy and beyond.
(Tags: Italy, Miriam, Children)