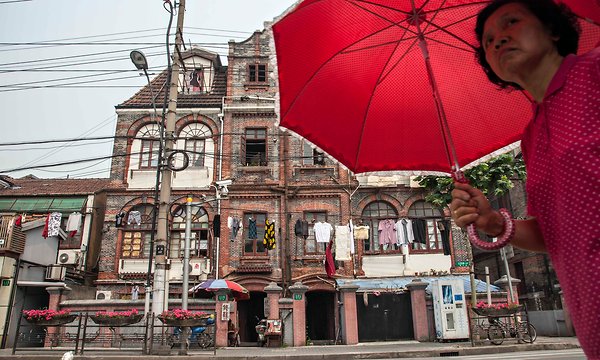 While much of the city’s Jewish Quarter has disappeared in the years since the end of World War II, the Ohel Moshe Synagogue is a constant reminder of how this Chinese city saved tens of thousands of Jews fleeing the Holocaust.

Built by Russian Jews in 1927 in the Hongkou district in northern Shanghai, the synagogue was the primary religious destination for the Jewish refugees who flooded into the city.

And while its facade has not changed, the building now is the Shanghai Jewish Refugees Museum. It is the first stop for many visitors seeking information about what the Holocaust scholar David Kranzler called the “Miracle of Shanghai.”

About 20,000 refugees settled around the synagogue, in an area called the Restricted Sector for Stateless Refugees but more commonly known as the Jewish Ghetto. The 2.68 square kilometers, or about a square mile, which was cordoned off by the Japanese who controlled the city, also was home to 100,000 Shanghaiese, who were welcoming to their new neighbors, according to Jian Chen, the museum’s director.

“After the end of the Pacific War in 1945, the European Jewish refugees slowly left Shanghai,” Mr. Chen said. “However, they always looked upon Shanghai as their second home, calling the city their ‘Noah’s Ark’.”

The museum’s second and third exhibition halls display the stories of 20 Shanghai Jews in words and pictures.

Sometimes visitors tell those stories themselves, according to Dvir Bar-Gal, 47, a journalist who was born in Israel and has been conducting walking tours of significant Jewish landmarks in Shanghai since 2002.

“Today we had lady that lived for 10 years in the ghetto,” Mr. Bar-Gal said. “Three days ago, a student in Shanghai came on the tour; his grandpa was a barber here and we discovered his photo on a wall.”

A favorite story involves Hans Cohn, who was 13 when he and his family arrived in Shanghai. He had his bar mitzvah at Ohel Moshe and eventually became a cantor in the San Francisco area. But by the time he returned to Shanghai, throat cancer had robbed him of his singing voice so he told his story in the museum’s main hall with the help of an automated voice box.

The area surrounding the museum is called the Tilanqiao Historic District, which contains the only well-preserved living quarters used by the refugees. At a glance, these may look like typical, older Shanghai streets, but it takes only a little imagination to picture what life was like with as many as 30 sharing a room.

One notable spot in the district is the intersection of Chushan Road, now called Zhoushan Road, and Huoshan Road, one block south of the museum, an area was once known as “Little Vienna” for its European-style cafes, shops and nightclubs.