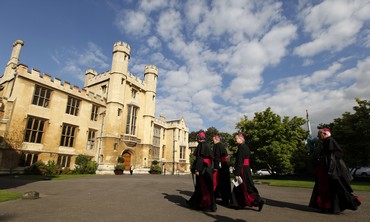 The relationship between the Jewish community and the Church of England has taken a downward turn following its decision to strengthen ties with an anti- Israel group.

The Jerusalem Post has learned that the Board of Deputies of British Jews has pulled out of meetings this week with Lambeth Palace, the official residence of the archbishop of Canterbury.

A motion is also set to be raised at the board’s monthly meeting in which the deputies will call on the organization to sever all ties to the Church of England.

At its General Synod in York on Monday, the Church’s highest legislative body voted overwhelmingly to strengthen ties with the Ecumenical Accompaniment Program in Palestine and Israel (EAPPI), a group that supports the boycott, divestment and sanctions campaign against Israel and stands accused of having an anti-Israel stance and harboring a “one-sided” narrative.

According to its website, EAPPI brings people to the West Bank to experience “life under occupation.” The organization takes about 20 “ecumenical accompaniers” to the region every year, where they volunteer in Hebron, Jayyous or Yanun and accompany Palestinians through checkpoints while monitoring any perceived abuses. They have no contact with mainstream Israelis and are expected to participate in 10 speaking events after returning to their home countries, with most doing many more.

The Board of Deputies has described the move to support EAPPI as siding with an “inflammatory and partisan” program at the expense of interfaith relations.

“Justifying its decision using the views of marginal groups in Israel and the UK, the Synod has ridden roughshod over the very real and legitimate concerns of the UK Jewish community, showing a complete disregard for the importance of Anglican-Jewish relations,” the board said in a statement.

The Jerusalem-based research organization NGO Monitor said EAPPI was a major player in the delegitimization campaign against Israel and that it places blame solely on Israel for the difficulties faced by Christians in the Holy Land.

“EAPPI is a one-sided advocacy group promoting the Durban strategy of boycotts, divestment and sanctions against Israel, supporting the Palestinian claim of a ‘right of return,’ which is code for ending Israeli sovereignty, and systematically ignoring continuous Palestinian terror attacks against Israeli civilians – each one a war crime,” said Yitzhak Santis, the chief programs officer at NGO Monitor.

The board also raised concerns about Monday’s debate and the language used by speakers.

“The Jewish community does not need lessons from the Anglican Church in justice and peace, themes which originated in our tradition. Moreover, to hear the debate at the Synod littered with references to ‘powerful lobbies,’ the money expended by the Jewish community, ‘Jewish sounding names’ and the actions of the community ‘bringing shame on the memory of victims of the Holocaust,’ is deeply offensive and raises serious questions about the motivation of those behind this motion.”

The Israeli Embassy said it was deeply concerned that the Church had endorsed EAPPI.

“Christians face rising persecution across the region and yet, by supporting this group, the Church of England has chosen to amplify one-sided voices and to single out Israel – the only country [in the Middle East and North Africa] where Christian rights are enshrined and the Christian population is growing,” a spokesman for the embassy said.

“We share the concerns of all those within the Church of England who opposed this resolution as being misguided and undermining hopes for genuine understanding and reconciliation.”

The board said that EAPPI’s program lacked any kind of balance and showed nothing of the context of a hugely complex situation.

“Unsurprisingly, its graduates return with simplistic and radical perspectives, giving talks against Israel which do nothing to promote an understanding of the situation in the Middle East, much less promote a peaceful and viable solution to its problems,” the board said.

“Unfortunately the [EAPPI] speeches and presentations can appear to be anti-Israel and run the risk of leading to anti-Jewish sentiment. This is a worrying situation for those of us dedicated to Jewish-Christian relations and the fight against anti- Semitism,” said the Council of Christians and Jews, the UK’s oldest interfaith organization.

Rev. John Dinnen, from the Hereford diocese, the author of the motion, said he was very happy that it passed, maintaining that it “supports organizations working for a just peace and human rights of Palestinians and Israelis.”

Archbishop of Canterbury Rowan Williams abstained in the vote and supported an amendment that watered down the motion proposed by the bishop of Manchester.

Rev. Dr. Toby Howarth, the interreligious affairs adviser and secretary for interreligious affairs to the archbishop, said, “We need to look at what happened at Synod in John Dinnen’s motion quite carefully. It was passed in all three Houses of Synod, but there was a large number of abstentions, which reveals a large degree of sympathy for the impact of the motion.

“Looking at the motion as it stands, quite apart from any background briefings that were provided, it was a motion that would have been hard for Synod members to vote against. EAPPI is a program that was called for by local church leaders in Jerusalem through the World Council of Churches. As was widely acknowledged, there are real issues at border crossings and settlements which make such a program necessary,” continued Howarth.

“The particular difficulty highlighted in the debate was the danger of some returning participants presenting their experiences in a way in which congregations might understand as representing the whole picture of the conflict. Many Synod members abstained, not willing to dismiss EAPPI, but presumably registering that they understood the negative implications for Jewish-Christian relations of a positive vote.”

Howarth recognized that the motion has caused hurt and anger within the Jewish community and that it will take time to work things through.

“The strong relationships built up over time both at a grassroots level and nationally do provide a solid framework for dialogue on this and other issues to continue. While Christian-Jewish relations are dominated at the moment by the Israel- Palestine conflict, not least because of the stalling of the peace process, there are many other things that Jews and Christians talk about,” he maintained.