Among millions celebrating Rosh Hashana this week are some 1,000 residents of China’s oldest Jewish community

Among the many Israelis and Jews around the world who will welcome the Jewish New Year are also 1,000 residents of China’s oldest Jewish community.

“From here in Kaifeng, China, we want to send our best wishes for a happy and healthy New Year to our brothers – the people of Israel,” says Wang Jian, one of the members of the city’s Jewish community.

Jian is particularly excited when talking about Israel. His son Yaacov made aliyah last year.

“Our ancestors have lived in China for over 1,000 years, and we are proud of our Jewish heritage and culture. We celebrate Rosh Hashana as the start of a new Hebrew year, and it is for us a very meaningful and important holiday. Like Jews everywhere, we dip apples in the honey, sing songs, and pray for a year of peace, health and aliyah!,” he says.

The Jewish community of Kaifeng was founded in the 9th century, apparently by Jewish merchants from Persia or Iraq. The city’s synagogue was built in 1163. At its height the community consisted of 5,000 Jews, many of whom were involved in Kaifeng’s commerce.

All of Kaifeng’s Jewish descendants belong to one of seven clans, each identifiable by its surname and family trees that stretch back for centuries.

Legend has it that when the Jews first arrived in Kaifeng, the Chinese emperor, unable to pronounce the Jews’ Hebrew-sounding names, bestowed his surname and the surnames of six of his ministers on them.

These seven names – Zhao, Li, Ai, Zhang, Gao, Jin and Shi – were used by Kaifeng’s Jews throughout the centuries. It is believed that the Li family’s original Hebrew name was Levi, and the Gao family was Cohen. 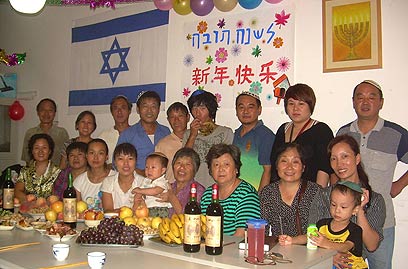 The community was struck by disaster several times throughout the 19th century: The last rabbi died without leaving an heir, the city’s synagogue was destroyed in floods never to be built again, and many Jews began assimilating.

There are approximately 1,000 descendants of the Jewish community living in Kaifeng, of whom about half are connected to their identity. In the absence of a synagogue, they will gather in their homes and celebrate the holiday with festive meals, eating the traditional apples dipped in honey. Members of the community will also gather to recite the traditional prayers and blow the Shofar.

Renaissance process
A number of Kaifeng Jews have made aliyah in recent years with the help of the Shavei Israel organization.

“Decendants of the Kaifeng Jewish community have been undergoing an historic process of regeneration and are getting to know their Jewish roots in recent years,” says Michael Freund, chairman and founder of Shavei Israel.

“We at Shavei Israel, who see great importance in strengthening the connection with decendants of the Jewish people cannot help but assist them in their efforts.”

Freund is calling the government of Israel to tighten relations with the community. “China is an economic and political super power and the Jews of Kaifeng can serve as a bridge between China and Israel.”