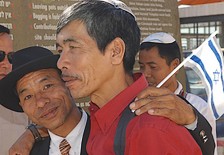 In addition to possibly shedding light on Israel’s distant past, the story of the Bnei Menashe also touches deeply on questions of Jewish identity.

In 1974, a strange letter from northeastern India landed on the desk of prime minister Golda Meir. It had been sent by a group of Indians claiming to be descendants of Menashe, one of the 10 tribes “lost” to Jewish history after the Assyrians destroyed the northern kingdom in 721 BCE.

The writers hoped the prime minister would recognize their portion in the extended family of Israel.

Although Meir didn’t respond, they persisted, and their persistence paid off: Today, 1,700 members of the community, called Bnei Menashe, the children of Menashe, live here.

Are the Bnei Menashe really descendants of one of the 10 lost tribes? It depends on whom you ask. The Indians themselves harbor no doubts.

Their forefathers sang a traditional song about crossing the Red Sea; they have a history of circumcising their children on the eighth day; and, riceeaters, they once celebrated a springtime festival in which they ate unleavened bread.

The way the Bnei Menashe tell it, their distant ancestors, after being exiled from Israel, traveled east until reaching China, where they settled for a few hundred years. Religious persecution then drove them to the isolated northeastern Indian states of Manipur and Mizoram, where most of the community lives today. British missionaries succeeded in converting some members to Christianity during the 19th century, but by the latter half of the following century the Bnei Menashe had returned to their Jewish roots and begun their roller coaster ride back to the land of Israel.

They got a push when Eliahu Avihail, a rabbi and messianic dreamer, made contact with them in the early 1980s. Convinced of their Jewish ancestry, he nevertheless explained that, having been cut off from the Jewish people for so long, they would be required to undergo Orthodox conversion.

Happy to demonstrate the intensity of their desire, the Bnei Menashe agreed: Between 1990 and 2003, approximately 800 members of the community managed to settle here by entering as tourists and then officially converting.

In 1997, the Bnei Menashe were honored with their first reply from an Israeli official when another in their long series of petitions reached Jerusalem Post columnist Michael Freund, then an aide to prime minister Binyamin Netanyahu and today the chairman of Shavei Israel, an organization dedicated to helping “lost Jews.”

Skeptical but moved by their sincere piety, Freund decided to help them; in time, he also became convinced that they were what they claimed to be, and started to lobby intensely on their behalf.

THE MIDDLE East being the Middle East, politics inevitably insinuates itself into every story. The slow but steady flow of Bnei Menashe into the country was halted in 2003 when leftists charged they were being cynically manipulated by the settler movement for messianic-political purposes; indeed, fully one-third of the community lives in Kiryat Arba, and the Bnei Menashe formed the largest immigrant group in Gaza prior to the 2005 disengagement.

Freund counters that the community set up shop in the territories because no one else was willing and able to take them in. To prevent further politicization of the issue, Shavei Israel has directed the most recent arrivals to the North.

To the delight of the Bnei Menashe, in 2005 Sephardi Chief Rabbi Shlomo Amar ruled that the community belongs to “the seed of [the people] Israel” and dispatched a rabbinical court to India to assist in formally converting members. But “mass conversion” is against the law in India, so the government ordered the rabbinical team to leave. Which brings us to the present, and the recent declaration by the Immigrant Absorption Ministry urging the government to act on behalf of the aspiring community.

Beyond the needs and challenges of immigration, there is much to be said about the Bnei Menashe episode. The Jewish people has been dreaming of the 10 lost tribes for a long, long time, the way brothers sometimes dream of one day seeing siblings they’ve lost. It is an especially poignant dream for a people that historically has felt, and been, alone. Thus it was that, in the late 1990s, the writer Hillel Halkin, intrigued by the Bnei Menashe story, set out to explore its various dimensions and ended up journeying to India before publishing a book on the subject, Across the Sabbath River.

After much investigation, Halkin, a self-declared “amateur historian,” concluded that there might indeed be a kernel of historical truth to the group’s claims. If a small number of Israelite exiles had mingled with local Indians, from whom some of the Bnei Menashe are descended, that would explain the biblically resonant stories and customs remembered by the elders of this “Manasite tribe.”

And if that was the case, Halkin wrote, modern debate over the history of the Bible would have to be revised: For years now, a war has been raging between the biblical traditionalists and the revisionists (who hold that the Bible was a late document composed in Persian or Hellenistic times, when many of its stories and customs were invented). If a group of Manasite tribesman, permanently separated from their fellow Israelites in the 8th century BCE., had known some of these stories and practiced some of these customs, it might be necessary to refine the terms of the debate.

IN ADDITION to possibly shedding light on Israel’s distant past, the story of the Bnei Menashe also touches deeply on questions of Jewish identity.

Toward the end of Across the Sabbath River, Halkin speculates that genetic testing might help make sense of the Bnei Menashe story. Taking up his challenge, two Israeli geneticists invited him to participate in a study of the community’s DNA. The results came back almost entirely negative.

Of course, not everybody is happy with the current fad of DNA testing.

Some observers worry that it might be a way of readmitting the muchmaligned notion of a Jewish “race” through the back door. Are Jews a religion, then? Not simply a religion: Even if testing should explode the notion that they constitute a distinctive race, they are unquestionably bound by biological ties.

If the Jews are neither a religion nor a race, what are they? The best answer would seem to be the Bible’s: They are the children of Israel – that is, an extended family with a distinct way of life. Like every self-respecting family, moreover, they are entitled to ask questions of anyone wishing to join them. Hence, the whole notion of conversion, about which – DNA or no DNA – Jewish religious law could not be clearer. If the Bnei Menashe convert to Judaism, they’re Jews.

Maybe the Bnei Menashe are descended from the 10 lost tribes, maybe not. Either way, they’re part of the family now.