Many Lemba are Christians and Muslims, but they embrace their Jewish roots

The Lemba people of Zimbabwe and South Africa may look like their compatriots, but they follow a very different set of customs and traditions.

They do not eat pork, they practise male circumcision, they ritually slaughter their animals, some of their men wear skull caps and they put the Star of David on their gravestones.

Their oral traditions claim that their ancestors were Jews who fled the Holy Land about 2,500 years ago.

It may sound like another myth of a lost tribe of Israel, but British scientists have carried out DNA tests which have confirmed their Semitic origin.

These tests back up the group’s belief that a group of perhaps seven men married African women and settled on the continent. The Lemba, who number perhaps 80,000, live in central Zimbabwe and the north of South Africa. 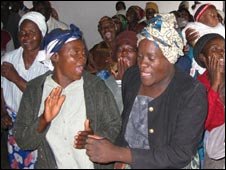 Lemba women do not have Jewish DNA

And they also have a prized religious artefact that they say connects them to their Jewish ancestry – a replica of the Biblical Ark of the Covenant known as the ngoma lungundu, meaning “the drum that thunders”.

The object went on display recently at a Harare museum to much fanfare, and instilled pride in many of the Lemba.

“Very few people knew about us and this is the time to come out. I’m very proud to realise that we have a rich culture and I’m proud to be a Lemba.

“We have been a very secretive people, because we believe we are a special people.”

The Lemba have many customs and regulations that tally with Jewish tradition.

They wear skull caps, practise circumcision, which is not a tradition for most Zimbabweans, avoid eating pork and food with animal blood, and have 12 tribes.

They slaughter animals in the same way as Jewish people, and they put the Jewish Star of David on their tombstones.

Members of the priestly clan of the Lemba, known as the Buba, were even discovered to have a genetic element also found among the Jewish priestly line.

“This was amazing,” said Prof Tudor Parfitt, from the University of London.

“It looks as if the Jewish priesthood continued in the West by people called Cohen, and in same way it was continued by the priestly clan of the Lemba.

“They have a common ancestor who geneticists say lived about 3,000 years ago somewhere in north Arabia, which is the time of Moses and Aaron when the Jewish priesthood started.”

Prof Parfitt is a world-renowned expert, having spent 20 years researching the Lemba, and living with them for six months.

The Lemba have a sacred prayer language which is a mixture of Hebrew and Arabic, pointing to their roots in Israel and Yemen.

Despite their ties to Judaism, many of the Lemba in Zimbabwe are Christians, while some are Muslims.

“Christianity is my religion, and Judaism is my culture,” explains Perez Hamandishe, a pastor and member of parliament from the Movement for Democratic Change (MDC).

Despite their centuries-old traditions, some younger Lemba are taking a more liberal view.

“In the old days you didn’t marry a non-Lemba, but these days we interact with others,” says Alex Makotore, son of the late Chief Mposi from the Lemba “headquarters” in Mberengwa.

“I feel special in my heart but not in front of others such that I’m separated from them. Culture is dynamic.”

The oral traditions of the Lemba say that the ngoma lungundu is the Biblical wooden Ark made by Moses, and that centuries ago a small group of men began a long journey carrying it from Yemen to southern Africa.

The object went missing during the 1970s and was eventually rediscovered in Harare in 2007 by Prof Parfitt.

“Many people say that the story is far-fetched, but the oral traditions of the Lemba have been backed up by science,” he says.

Carbon dating shows the ngoma to be nearly 700 years old – pretty ancient, if not as old as Bible stories would suggest.

But Prof Parfitt says this is because the ngoma was used in battles, and would explode and be rebuilt.

The ngoma now on display was a replica, he says, possibly built from the remains of the original.

“So it’s the closest descendant of the Ark that we know of,” Prof Parfitt says.

Large crowds came to see the unveiling of the ngoma and to attend lectures on the identity of the Lemba.

For David Maramwidze, an elder in his village, the discovery of the ngoma has been a defining moment.

“Hearing from those professors in Harare and seeing the ngoma makes it clear that we are a great people and I’m very proud,” he says.

“I heard about it all my life and it was hard for me to believe, because I had no idea of what it really is.

“I’m still seeing the picture of the ngoma in my mind and it will never come out from my brain. Now we want it to be given back to the Lemba people.”