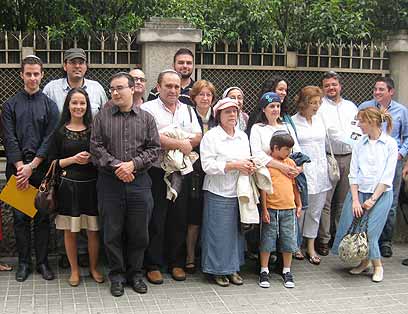 BARCELONA – It’s been more than 500 years since the Spanish Inquisition, but it’s still not the easiest thing being a Jew in Spain these days, and it’s even harder being a Catholic and discovering one day that you have deep, Jewish roots. But this is what is happening to a number of Catholics in the Mediterranean country.

Many descendants of 15th century ‘Anousim’ or ‘Marranos’ – Jews who were forced to outwardly convert during the Inquisition and camouflage their religious practices – are now trying to return to their roots.

The ‘Shavei Israel’ organization “holds out a hand” to “lost” Jews, those who for historical or geopolitical reasons were distanced from their faith over centuries and decades. Among them, they help interested Bnei Anousim (descendants of those compelled to embrace Catholicism) to connect with and even convert to Judaism.

In early June, 70 such bnei anousim arrived at the Barcelona Jewish community center for an unprecedented conference intended to enlist their help in advocacy efforts for Israel in Europe. Most participants came from Spain, with some from Portugal and Italy.

‘Worried about speaking out’
Prof. Filipe Ferrao, who had been lighting Friday evening candles his entire life but only entered a synagogue for the first time 22 years ago, described the hesitance of bnei anousim in the region of declaring their Jewish roots publicly. He noted that, after his first interview on the subject, his mother called him worried about the implications.

Unlike Prof. Ferrao, who gives interviews frequently and is writing a book about his personal experiences, another conference participant, Edouard, a doctor from Spain, refused to be photographed or even provide his full name.

In recent years, he has been receiving threats on his life after a Spanish-Muslim website published a fatwa calling for his death and that of a number of his friends who have written newspaper articles and blogs in support of Israel.

Edouard, who only found out six years ago about his Jewish background, has published over 1,600 pro-Israel articles to date but does so using a pseudonym. He and his wife converted, but discreetly, because of remaining anti-Semitism by a new name: “The new anti-Semitism is anti-Israelism, he says.”

Indeed, the Foreign Ministry lists Spain as one of the European nations most hostile towards Israel. Founders of pro-Israeli websites, such as 64-year-old Miquel Segura, have had their homes attacked and spray-painted with swastikas.

The enlistment of Bnei Anousim was the brainchild of Shavei Israel Chairman Michael Freund. It began in late 2008, after strident anti-Israeli sentiment rose in Spain following the inception of Operation Cast Lead. In one anti-Israel protest, some 2,000 participants attacked the Israeli embassy in Madrid and vandalized it.

A few days later, a pro-Israel counter-rally was organized. Hundreds among the 4,000 participants were Bnei Anousim who came from all over the country.

According to Freund, an Israeli of American origin, there are tens, if not hundreds, of thousands of Bnei Anousim living in the Iberian peninsula who are well aware of their heritage and have a connection with the Jewish people, even if they have not converted.

The fact that many of them are taking the initiative and asking to volunteer as advocates for Israel is an exciting historical development,” Freund said at the time. “The Bnei Anousim are perfectly positioned to serve as good-will ambassadors for Israel and the Jewish people in Iberia and elsewhere. Israel can and should cultivate a long-term relationship with them.”

But recently, their enthusiasm appears to have been rattled. At the recent conference, attended by Einat Kranz-Nieger, the deputy chief of mission at the Israeli Embassy in Madrid, the atmosphere was tense because of fears of hostile public opinion in Spain.

Nonetheless, conference participants appeared willing to continue defending Israel even if, like their ancestors, circumstances force them to do so while hiding their identity.
(Tags: Spain, Conversos, Anti- Semitism, Jews)