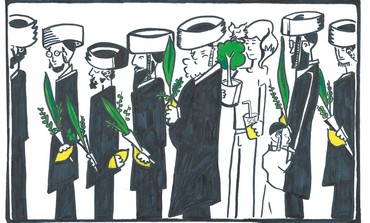 Sephardi Chief Rabbi Ovadia Yosef once said that non-Jews (“goyim”) were only born to serve Jews, and without them, they have “no place in the world.” “Why are gentiles needed? They will work, they will plow, they will reap. We will sit like an effendi and eat,” he said to some laughter.

This attitude is certainly extreme, although it raises questions about the character of the state and the role of the non-Jewish minority in Israel. While we sit, stuffing our effendi- like faces with honey cake, what will the 24.7% (that’s 1,915,500 people) of non-Jewish Israeli citizens be doing during the High Holy Days? Will they join us in our chicken-swinging, wine-drinking, apple-dipping festivities? Or is it just another day where the buses don’t work, the shops are shut and you’re all out of luck.

LAURIS MARCLIER moved here three years ago from Colombia to live with her boyfriend, yet has still not got used to the Jewish calendar. She commented: “I never know when these days are coming up. They should drop leaflets from planes, or something, like they do before a bomb.”

Another interviewee commented on what he called “The Great Famine of Rosh Hashana 2011.” He recalled having only two bananas to eat at the end of the extra long four- day holiday (Shabbat immediately followed the new year in 2011). “The very next day, I rushed to the grocery store and bought up canned goods as if I was preparing for a hurricane.”

Diaz, a Sudanese Israeli citizen, explained that there are certain customs and practices in Israel that were initially very unfamiliar to him.

“Now, in our own language newspapers, there are articles outlining the High Holy Days and explaining their significance. But when I arrived, there was little information out there to explain Jewish customs, and that things are closed on Shabbat.”

The majority of those interviewed for this article felt similarly about the complete shut- down of services during the hagim. Samir Ben Layashi, a researcher at the Moshe Dayan Center at Tel Aviv University, has been here fifteen years after moving from Morocco.

He voiced these frustrations, commenting: “This is very bad. Public services should be secular; they can slow down during the holidays, but they shouldn’t stop completely.”

He added: “I have a feeling that the holy days are invading the public – secular – space. That was what disturbed me a lot in Morocco, and it is starting to disturb me here as well.”

This issue has been raised recently after transportation minister Israel Katz threatened to reduce the city’s government funding for the city-run Tel-O-Fun bicycle rental project, after the Tel Aviv municipality decided that those with memberships could use them during Yom Kippur. Katz was backed by the religious parties among the city council.

He insisted that allowing Tel Aviv residents to rent bicycles on Yom Kippur would signify a grave affront to “the most holy symbol of the State of Israel.”

IT IS NOT just about bicycles – although it is an apt symbol, given the penchant of less- observant Israelis to take advantage of the empty streets on Yom Kippur to ride around freely. The question is how the state views the holidays; are they a “religious day” or an “Israeli day”? If it is the latter, how much do Israelis include the minority population in their celebrations?

Nilu, a migrant who came to Israel from Sri Lanka, now takes care of an elderly couple in Ramat Gan and is always included in their family celebrations. She recalls her first Rosh Hashana, and compared the idea of eating sweet things to her own traditions back home.

“We also lay tables full of sweet things during happy celebrations, it brings us luck. The apples are much juicer, and larger, back home, though!”

She added that each major religion had at least one national holiday. This idea embraced the multi religious and multi ethnic composition of Sri Lanka, and ensures knowledge about each other’s traditions.

“We have Easter off, as well as Id al-Fitr. Then of course, we are all given Diwali to celebrate.”

Mohammad, a resident of Baka al-Gharbiya, reiterated this pluralist idea. “Israel is a multi-religious place. The country is called the Jewish country, but it still has minorities with different religions; Druze, Christians, Bahais…It’s not their fault that the holidays come, and they can’t do anything.”

He recalls a time in Baka where the police would come and close the shops open during Yom Kippur, often issuing heavy fines for breaking the law.

“It should be a right of people not to observe, or to celebrate the holidays. They want to do every day things without being looked at as if they are being provocative…The Jewish religion is not imposed on people, but the laws certainly are. It shouldn’t be a crime [not to observe the holidays.]”

He noted that most holidays don’t affect the residents of Baka, jovially commenting: “There is no Yom Kippur in my city.”

On the issue of inclusion in Israeli festivals, Mohammad added that although they were taught about the holidays in school during Hebrew language and literature lessons, “we didn’t really learn a lot about them. At least not in detail.”

Many non-Jewish Israeli’s learn from experience, from living in the country and becoming accustomed to the traditions. Nilu, for example, learnt about Israeli culture by cooking the food (she is a dab-hand at Iraqi kubbeh – delicious meat stuffed dumplings) and hearing her young daughters singing Hannukah songs. She added that in the house, they have started celebrating Jewish holidays, erecting two flags — one Sri Lankan, the other Israeli— in their kitchen for such occasions.

Similarly, Samir has learnt a lot about the high holy days by eating traditional food. “In Passover dinner, for example, I eat exactly what they eat, and try to read some passages from the Hagada. On Yom Kippur, I never tried to fast; I like to identify with other cultures holy days through their culinary, happy side.”

The flip side of the Latka

CERTAINLY THE holidays are unavoidable in Israel, whether you like them or not. But how visible are the holidays of the minority to Israeli citizens?

“I remember, one day, one colleague saw me with a cup of coffee during Ramadan,” Samir recalled. “He asked me if I fasted during Ramadan. I replied no. In actual fact, I did not know it was Ramadan. Let’s say that in my first years in Israel it was relatively easy to be a secular Muslim in Israel.”

Khaled, a bedouin from the Negev, echoes this sentiment. “We stick to our own holidays. I don’t think anyone really knows when we are fasting, or perhaps they just don’t care.”

Samir added: “ ‘My’ holidays are celebrated here: Ramadan is the most important, but it is barely felt in Jaffa. I tried to go there by night to see if they celebrate it like in other Muslim countries… I remember when I lived in Cairo, people sang and danced the whole night in Khan Khalil. In Jaffa, Ramadan was invisible. And so are the Muslim inhabitants of Jaffa.”

Jewish holidays, and within that, Jewish law seep through many aspects of daily life. However, for Israel’s largest minority population, the Israeli Arabs, who constitute around 20% of the population, their presence during the holidays is often ignored – or even seen as provocative. Mohammad tells a story of his grandfather, who was pelted with stones when driving through a Jewish neighborhood in Jerusalem during a religious holiday. This kind of story represents a heavy intolerance for those who do not observe the festivals.

Mohammad noted: “Like Jews, Muslims are not supposed to work on Fridays. If the country wants to put on Shabbat laws, well, everyone should do whatever they want. Get on with your own religion in your own way, not impose it on other people. Practice your religion by yourself.” One American-Jewish student observed the “lack of Christmas” in Israel, despite the existence of up to 196,000 Christians in the country.

“There are no lights, no trees, no presents…it’s quite a nice escape from the bombardment back home,” she joked.

Last Christmas, however, the Jewish National Fund distributed locally-grown Christmas trees to churches and the general public in Israel. Such examples show a concerted effort to enjoy the festive presence of minorities. Many Israelis enjoy the celebrations of other traditions; this year, thousands showed up to enjoy the Jerusalem Sacred Music festival, hearing religious music from Zimbabwe to Brazil and authentic rituals of Jerusalem’s diverse faiths.

There is also diversity within Jewish celebrations themselves. Traditions have evolved since the creation of the state to incorporate the vast diversity of customs that exist in each ethnic community. Many Ashkenazim, for example, enjoy the traditional maimuna, a Moroccan festival for breaking Passover. Yet for every positive step forward, there is also a step back – as demonstrated by the recent decision to phase out the Ethiopian community’s white-turbaned clergy, or kessoch, from the rabbinate.

On the eve of the holidays

Israel is by no means unique in its struggle to maintain an identity whilst accommodating for their minority populations. But fundamental to Jewish law is the divine edict to treat the “stranger in your midst” with generosity and justice. By opening our hearts, our traditions and our tables to one another, this New Year will be the sweetest yet.