In recognition of the Bnei Menashe’s successful absorption in Israel, the Minister of Immigrant Absorption Sofa Landver, will unveil a new exhibition depicting the story of this unique community.

The exhibition, which was created by the Shavei Israel organization, portrays the community’s daily life in Israel and northeastern India, where most currently still reside, and chronicles their return to the Jewish people after centuries of isolation.

The exhibition will be launched on Wednesday at the Ministry of Immigrant Absorption in Jerusalem. A ceremony will be held in the presence of Minister Landver; Shavei Israel founder and Chairman Michael Freund; Kiryat Arab Municipality head Malachi Levinger; and Bnei Menashe community Leaders. 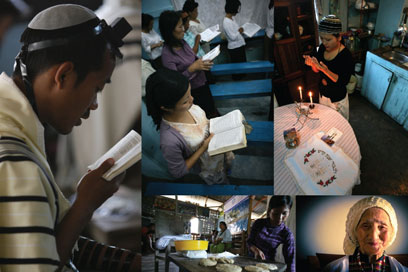 The Bnei Menashe (Hebrew for “sons of Manasseh”) claim descent from one of the Ten Lost Tribes of Israel, who were sent into exile by the Assyrian Empire more than 27 centuries ago. They live in India’s northeastern border states of Manipur and Mizoram.

Throughout their exile, the Bnei Menashe nonetheless continued to practice Judaism just as their ancestors did, including observing Shabbat, keeping kosher, celebrating the festivals and following the laws of family purity. And they continued to nourish the dream of one day returning to the land of their ancestors, the Land of Israel.

In recent years, Shavei Israel has brought some 1,700 Bnei Menashe back home to Zion. Another 7,200 still remain in India, waiting for the day when they too will be able to return to Israel and the Jewish people.