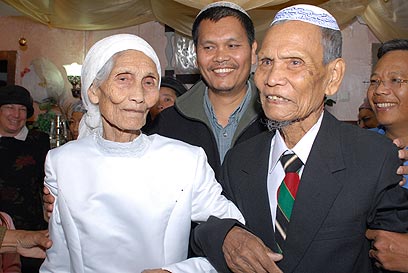 Ya?akov Manlun, 97, and his wife Orah, 88, new immigrants from the Benei Menashe Tribe of India, wed Friday in a lavish ceremony joined by many guests in Kiryat Arba.

Ya?akov and Orah have been married for almost 70 years, and have recently made aliyah to Israel. The couple concluded their conversion process days ago and asked to be remarried under the Law of Moses.

Ya?akov is the oldest oleh from the Benei Menashe Tribe of India, as well as one of the oldest immigrants to ever make aliyah. The couple immigrated to Israel last year with the help of Shavei Israel, an outreach organization assisting “lost Jews” seeking to return to the Jewish homeland.

The couple, who have waited nearly 15 years to receive permission to make aliyah, has nine children (three of which also made aliyah), and nearly 70 grandchildren, great-grandchildren, and great-great grandchildren living in Israel and India.

Michael Freund, Chairman of Shavei Israel, who has worked energetically for many years in bringing members of Benei Menashe to Israel, said that in addition to being especially touching and joyful, “This wedding proves it is never too late to fulfill one?s dreams.?