There are so few Jews in the subcontinent that the census lists them with the 0.6% of religious ‘others.’ But while their weddings reflect an absorption of the surrounding culture, they remain wholly Jewish

BANGLORE — When Indian couple Sharon Bhalkar and Shulamith Malekar tied the knot in March, their wedding had all the pomp of a typical big Indian ceremony. From elegant sarees and fragrant curries to a DJ spinning the latest Bollywood hits, this could have been any other Indian wedding in the capital city, Delhi.

Except that both Sharon and Shulamith can trace their ancestry all the way back 2,000 years to Israel. Little is written about India’s Jewish population. Jews in the subcontinent are such a minority that even the national demographic census lists them under the 0.6% of religious “others.” Quite often, India’s Jews are lumped together with another religious group that migrated from West Asia: the Parsees.

While the exact dates of their migration remain hazy, the Bene Israeli Jews, as they are referred to locally, probably left Israel prior to the years of Selucid persecution under Antiochus Epiphanes in 167 BCE. This would explain why the festival of Hannukah isn’t celebrated among most Indian Jews.

Like most other migrant communities, the Bene Jews gradually integrated into Indian society over centuries by drawing on local customs and finding room for them in their own traditions and observances. The Indian Jewish wedding is possibly the most visible example of this socio-cultural amalgamation.

Abigail and Isaac Rohekar were married at the Succath Shelomo synagogue in the west-Indian city of Pune in 1955. (Photo credit: Paul Dharamraj and Ofira Reuben/Times of Israel)

“Indian Jews try to follow as many traditions as possible,” says Nirah, a former El Al employee who married a Jewish Indian air force pilot, Abraham Doodhkar, in 1984. “Jews are known for adjusting to the society they live in, and borrowing from local culture.”

The biggest Indian element at a Jewish wedding is the mehndi ceremony, in which the bride’s hands are adorned with designs in henna. The pre-wedding ritual typically marks the start of a Hindu wedding. As all Jewish weddings are on Sundays, the application of henna begins two days earlier on Friday mornings.

But apart from decorating the bride’s hands, other local rituals include wearing a garland strung from jasmine flowers and smearing a yellow paste of turmeric on both the bride and the groom’s faces.

“Turmeric is applied to the bride’s face so that she will have sparkling skin for her wedding day,” says Aviva, Nirah’s daughter, who married David Mapgaonkar in 2004.

However, she adds that the reasons for the turmeric paste are more than simply cosmetic.

“When I got married, I was told that in Indian tradition, the turmeric is said to bless the couple with fortune and prosperity,” says Aviva.

For her wedding ceremony, her mother Nirah wore a white saree — a six-meter length of embroidered silk draped gracefully. Aviva, however, went western, swapping the traditional garb for a white gown. She changed into a colorful burgundy saree for the reception.

Another point of difference with the western Jewish wedding, Nirah says, is that Indian Jews don’t give too much importance to ring exchanges. Instead, they’ve adopted the Indian practice of tying the mangalsutra — a gold and black bead necklace which symbolically keeps the couple safe from harm. The groom gives his bride a mangalsutra, she adds.

The pre-wedding henna ceremony ends with a group song-and-dance routine, popularized by Bollywood cinema and encouraged by the older married women.

Indian Jews, however, remained atavistic when it comes to the religious components of the wedding, with all prayers and rituals handed down from one generation to the next.

To begin with, all Jewish weddings have to be conducted in a synagogue (Mumbai, Delhi and the coastal city of Cochin have some of the oldest synagogues in the country).

Chupah, the sheva brachot prayers and glass-breaking are paid great attention at community weddings. But even as all prayers are recited in Hebrew, a majority of the Indian Jewish community cannot speak or read the language anymore.

At Aviva’s wedding, her husband (and most of the congregation) couldn’t read the Hebrew script. Given the centuries since the Bene Israeli fled to India, most modern Jews have neglected reading the scriptures in the original language. However, they’ve found a way around it—by transliterating all the prayer books into local Indian languages.

David Mapgaonkar puts a mangalsutra on Aviva during their wedding ceremony in 2004. (photo credit: Paul Dharamraj and Ofira Reuben/Times of Israel)

Abigail, Aviva’s grandmother and Nirah’s mother, was married to the late Isaac Rohekar in 1955. One of the most important prayers at a Jewish wedding is the opening prayer, which welcomes the bride as she enters. Issac, Abigail says, couldn’t read any of the prayer in Hebrew.

“Eventually, we had to get him to read it in Marathi,” she reminisces. “Nobody taught us how to read Hebrew locally back then — except for the occasional rabbi visiting from Israel.”

Her granddaughter Aviva had a similar experience with prayers. However, her mother adds that her future husband Abraham put in a good six months’ practice to get the prayers right.

“We’d hear him singing every morning for at 5 a.m. for half a year before the wedding,” Abraham’s sister Shamira says, remembering how his morning ritual drove the entire family up the wall.

Once the ceremonial bits come to an end, guests make their way to the colorful reception. Traditions from both the Indian and Jewish heritage find representation here. The community rendition of Hava Nagilah and the “chair dance” have remained wedding favourites locally. Equally popular are enthusiastic singalongs and dances from Bollywood films.

Indian cuisine is popular at Jewish wedding receptions, albeit with a kosher twist. Everything from the mutton kebabs to the chicken biriyani is prepared in strict accordance with the Jewish dietary laws.

As a part of the mehndi ceremony, David looks for his name, which is written in henna on Aviva’s hand. (photo credit: Paul Dharamraj and Ofira Reuben/Times of Israel)

“We had kosher meat, but all cooked as Indian cuisine,” says Aviva, who now studies dentistry in Las Vegas. “Since all we have are Indian caterers, it’s usually local cuisine that everyone opts for.”

Kosher standards are taken very seriously among Indian Jews, Nirah says. She mentions that local synagogues have refused to use cooking vessels which show even the slightest traces of milk or dairy products for meat preparation.

There’s no shortage of local flavors, from tangy appetizers like the pani-puri to fiery mutton curries. The crowning glory at these feasts is the popular chicken biriyani, a rice dish with pan-Indian appeal. With its strong spices and condiments, the biriyani is made in over 30 different ways in various parts of the country. Indian Jews, not to be outdone, have their own recipe, Nirah says.

The most telling story about the Indian Jews’ long-standing cultural ties to the faith, however, comes from a local legend that Nirah narrates. When an Israeli rabbi first visited India back in the 18th century with the East India company, he couldn’t initially swallow claims that a few locals made about being Jewish. Only later, when he took a stroll along the shores, did he get the evidence he needed. Local immigrant fisherwomen were sorting out the day’s catch. Like Sharon and Shulamith carefully holding on to their heritage, these fisher folk wouldn’t even touch unscaled fish because it was “against their tradition and dietary customs.” 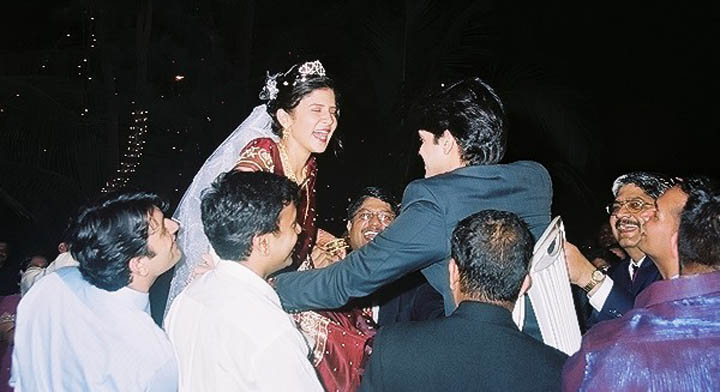 Aviva and David Mapgaonkar’s first kiss after the wedding, as their friends and family hold them up on chairs. (photo credit: Paul Dharamraj and Ofira Reuben/Times of Israel)