MOISÉS VILLE, Argentina — At its height in the 1940s, this outpost on Argentina’s grasslands had four synagogues for a population of 5,000, a theater for Yiddish-language acting troupes, a newspaper filled with feverish debates about the creation of the state of Israel and saloons where Jewish gauchos galloping in from the pampas could nurse a drink alongside fellow cowhands.

Now, Moisés Ville, founded in 1889 by Jews fleeing the pogroms of the Czarist Russian empire, has only about 200 Jews among its 2,000 residents. The last regularly functioning synagogue lacks a rabbi. The Hebrew school halted classes this year because of the dwindling number of Jewish children. Some of the last remaining Jewish gauchos have swapped their horses for Ford pickup trucks, and they now ponder the future of their way of life. 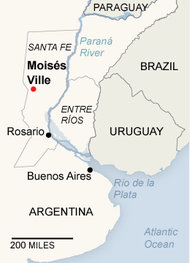 Many historical buildings in Moisés Ville are boarded up.

“There are various types of gauchos: those who look for trouble; those who are valiant soldiers; those who meekly take orders,” said Arminio Seiferheld, 70, who owns a small herd of Braford cattle and lives in a modest house shaded by palm trees. His leathery skin attests to a lifetime spent roaming the plains in harsh weather.

“I’m the type of gaucho who is still here, a survivor in a place where we once thrived,” he said, dressed in bombachas, the loosefitting pants worn by Argentina’s horsemen. His parents, Jews who fled Nazi Germany in the 1930s, made their way to Moisés Ville when it was a linchpin for more than a dozen Jewish farming colonies scattered across Argentina’s grassy plains, known as the pampas.

These days Moisés Ville, with many of its historical buildings boarded up (some of them Art Deco gems), is not quite a heartbreak of a town, but it feels pangs as traditions continue to fade. Captured over the decades in writings and film, its rise and fall ranks among the most remarkable chapters in the history of Argentina’s Jews, who at 250,000 are Latin America’s largest Jewish population.

Alberto Gerchunoff, an Argentine writer who was born in what is now Ukraine in the 1880s but arrived here in 1889 as the child of a settler, described the culture of Argentina’s first rural Jewish settlements in short stories. Tragedy enveloped his early experience here, as it did for many other pioneers from Eastern Europe, when a gaucho killed his father.

His family moved to Entre Ríos, a province with a cluster of Jewish farming colonies, and he went on to write “The Jewish Gauchos,” a 1910 classic of Argentine literature about the travails of those making their way from oppressed European shtetls to the seemingly endless plains of Argentina, a ranching power that then ranked among the world’s richest nations.

Hearing about Argentina’s openness to large waves of immigrants from Europe, 136 families came here in 1889 from the Pale of Settlement, the area of the Russian empire where Jews were allowed to live. They thought they had been promised fertile land to till, but upon their arrival they were abandoned at an unfinished train station.

Throughout the first winter, the settlers begged for food from passers-by. Dozens of children died from diseases and exposure. “There was no cemetery yet, so their bodies were placed in kerosene cans,” said Eva Guelbert de Rosenthal, 66, the director of Moisés Ville’s small museum, which preserves the town’s history.

Reports of their plight reached Buenos Aires and, eventually, Europe. Baron Maurice de Hirsch, a German-Jewish banker and philanthropist, bought land for the pioneers, establishing Moisés Ville as a precursor to a more ambitious colonization project with the aim of resettling Jews in places like Argentina, Canada, the Palestinian territories and the United States.

Financed by philanthropists, towns with names like Sonnenfeld, Lucien Ville (after the baron’s son) and Ingeniero Miguel Sajaroff began to dot the pampas. Lacking secondary schools in their new settlements, many parents sent their children to Moisés Ville’s boardinghouses. A school here for teachers of Hebrew trained educators from across Argentina until a decade ago.

Yiddish remained the dominant household language here for generations, spoken by everyone from gauchos to pharmacists and itinerant salesmen. One of Moisés Ville’s two libraries still holds hundreds of tomes in Yiddish by writers like Simon Dubnow, a Russian-Jewish historian, and Sholem Asch, a novelist born in Poland.

“An Israeli researcher recently came here and stood in awe of our books, explaining that their value was immeasurable,” said Analía Fischer, 51, a Hebrew teacher here who no longer has any students.

Ms. Fischer guided a visitor one recent morning into the 700-seat Kadima Theater, which was inaugurated in 1929 with a concert featuring a soprano from Moscow. Recent windstorms had torn holes in the theater’s roof, and rain had damaged the elegant structure, still perched above the plaza but rarely used now by anyone in Moisés Ville.

Since the 1950s, hundreds of Moisesvillenses, as the town’s residents are known, have emigrated to Israel. Many others moved to larger Argentine cities like Buenos Aires or Rosario. Some went to the United States or Europe, fleeing the wild swings in Argentina’s economy. Residents joke that they plant wheat but sow doctors, a way of explaining that opportunities elsewhere beckon educated, young people.

What is left is a town that appears ready to fade into history. Stars of David persist on weathered building facades. Octogenarians ramble down streets named in honor of Baron de Hirsch and Theodor Herzl, the Budapest-born writer who was the founder of modern Zionism.

Some traditions refuse to die. Bernardino and Aníbal Urban, two brothers in their 60s descended from Italian immigrants who own the bakery La Central, still make challah, the braided bread eaten on the Sabbath and holidays, and an array of Jewish pastries. “The whole town likes this stuff,” said Aníbal Urban. “It’s part of us now whether you’re Jewish or not.”

On Rosh Hashana, the Jewish New Year, Mr. Seiferheld, the self-described gaucho, still blows the shofar, or horn. For regular services each Friday evening, to solemnly welcome the Sabbath, he and a small group of others make do without a rabbi. At least they still have two synagogues in fine condition to choose from.

Some of the older Jews of Moisés Ville shrug and look to the ground when asked about what comes next for their outpost. Young people, as they might well do in small towns anywhere, complain of the tedium. Large-scale soybean farms are steadily displacing cattle ranches, once the source of great tales, from the surrounding pampas.

But while many trends which seem irreversible, exceptions persist. Abel Gerson, 29, the only one of his three siblings to remain in Moisés Ville, smiles when describing what keeps him here. Bespectacled and clad in bombachas and a boina, the beretlike cap of the gauchos, he still raises cattle, reaching his herd in a battered Ford pickup.

“I grew up here, so I can’t really see myself doing anything as satisfying as this,” Mr. Gerson said. Then, as he departed toward the range, he waved and said, “Shalom.”
(Tags: Argentina, Jews)