A visit to exotic Tahiti and the nearby islands of Moorea and Bora Bora is unexpectedly rich in Jewish history. 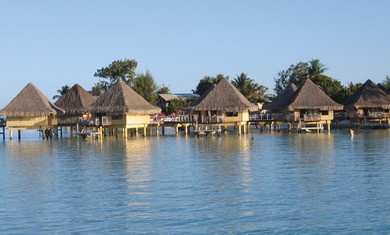 Once, I arrived in Haifa by boat at twilight.

Spellbound, I gazed at the city unfolding before me in its rise to the top of the Carmel. From that time on I felt that the best way to enter a country was from the sea. I still believe that, with one exception, however; and that is the island of Tahiti.

Touching down at Faa’a, the large airport located a few miles outside the French Polynesian capital of Papeete, one immediately feels the heady scent of flagrant flowers.

Indeed, the warm-scented air makes one drowsy, though not sleepy enough to fail to notice the beautiful Tahitian women passing out tiare flowers, a tiny white gardenia, the island’s national blossom, usually worn over the ear.

Tahiti in French Polynesia is a mind-set associated with paradise. You see, God truly must have formed the islands and placed coral necklaces around them. They are too perfect: Bright morning sunshine, calming breezes, turquoise lagoons, spectacular waterfalls, towering mountains, verdant fields and friendly people.

Yes, there are Jews on the exotic island of Tahiti.

And yes, there is a synagogue in the capital city, Papeete, and its members live on the main isle of this group of 121 volcanic islands and coral atoll, 76 of them which are inhabited.

Ahava’v’Ahava (Love and Friendship) is the name of this house of worship built in 1993. The title, it was explained to me, helps nourish the Tahitian tradition of love and romance and reflects kindly and accurately on an isle that was made famous by French artist Paul Gauguin, as well as romanticized by authors Herman Melville, Robert Louis Stevenson, Pierre Loti, W. Somerset Maugham, James Michener and anthropologist Margaret Mead.

Standing there in front of the synagogue, I could see that its exterior meshed nicely with island paradise atmosphere. Here was this white-washed house of prayer nestled in the midst of lush, tilting palm trees, date and mango trees and located at rue Morenhout, Quartier Fariipiti, in the bustling port city of Papeete that claims 132,000 residents.

Dr. Yonah Poul, active in the community, told me that he is sure that the sukkah here could easily win the prize of one of the most beautiful in the world, since the hut is decorated with tropical flowers and fruits.

Meeting the congregants, I quickly discovered that some of the members of this congregation came to Tahiti as adventurers, filled with wanderlust. Most of the Jews here hail from Morocco and Algeria, via France.

They want to live out their days in “paradise,” even if heaven is 12,000 miles from Paris. These former French Jews came to the islands in the 1960s and formed ACISPO, a French acronym for Cultural Association for Israelites and Polynesian Friends.

Sponsored by ACISPO, the congregation claims a membership of about 200 people, a pretty reliable figure, because that is the number of Jews who show up for Yom Kippur services. Even though this congregation functions thousands of miles from its nearest neighbors, it desperately tries to keep Judaism alive. And it does so without a full-time rabbi and cantor, except occasionally for the High Holidays, such as this past year.

While several hundred congregants may show up for Yom Kippur services, according to Poul, only about 20 attend Friday-night or Saturday-morning prayers in this synagogue, which contains a mikva. One of the community’s torah scrolls was provided by the Egyptian Jewish community of Paris, and the other was contributed by a Los Angeles community. A few supermarkets carry kosher products.

As in all synagogues, the ark faces east, toward Jerusalem. I learned that Tahiti is “the farthest place on earth from Jerusalem – the exact antipode.”

“Apparently in geography, the antipodes of any place on earth is the point on the earth’s surface which is diametrically opposite it,” explained Poul. “Yet, because of our geographic situation at the antipode, the real direction of Jerusalem is… anywhere, because the Holy City is in fact just under our feet! However, because of custom, the ark faces east. But it could be anywhere else.”

As in France, the synagogue is governed by Orthodox tradition and the congregation does not waver from Orthdodox Judaism, at least when it comes to custom and observance inside the house of worship.

A small Sunday school functions here. Every Sunday morning two classes are held – one for children under seven years old, and another for bar mitzva-age students.

Today, most Tahitian Jews say they are French, Sephardic and Orthodox. Many like Poul settled here after serving in the French military in the islands. A large number are doctors or business people, most of the latter engaged in the sale of Tahitian pearls. Half of the community is composed of mixed marriages.

Mrs. Joseph Sebbag, an Ashkenazi from Belgium, told me that the islands “are a wonderful place to raise children.

“We have a good way of life. Always the sun.”

She adds, however, that for the educated cosmopolitan French, there is “no theater, no ballet, no culture, no music. Nothing.”

I discovered that in Tahiti, as in other small Diaspora communities, the young people leave for better jobs in other lands – in this case, the US and Israel. Tourism is down because of the economic recession in the US.

Fewer American-Jewish couples visited in 2011, according to Poul, who added that the financial downturn has hurt Tahiti, which obviously relies on tourism. A few Jewish couples left for Australia and the US last year, and one couple emigrated to Israel.

Today, the tri-color of France flies over Tahiti , one of the 14 Society Islands in the Pacific. Like many things in the South Pacific, the history of the Jewish community is shrouded in native mystique.

The first Jew probably arrived with Capt. James Cook in the 18th century. According to Virtual Jewish History Tour, Alexander Salmon, a Jew, moved to Tahiti in 1791 and later entered the Tahitian royal family when he married Arrioehau, a Polynesian princess. With the arrival of Catholic priests, most Jews assimilated or converted to Catholicism. The community was dormant until the arrival of French Jews in the 1960s. Since then, several rabbis from yeshivas in Israel came to teach and raise funds. Synagogue members say there is no anti- Semitism in Tahiti. “Polynesians believe in God and understand that everyone has his or her own religion,” a member of the community told me.

Leaving Tahiti for nearby islands, I was amazed at the number of honeymooners who flock to Moorea and Bora Bora. The luxurious lagoon-style-living draws them, especially the over-the-water bungalows, a perfect haven for honeymooners. Thatched roofs, a luxury bedroom, a sitting room to look through a partial glass-bottom floors to observe multi-colored fish swimming below, a luxurious bathroom and private balcony make these bungalows very attractive and, I might add, expensive.

Though you live directly above the water, you have nothing to fear, even on a stormy night. The protection of the reef breaks the waters to shelter the bungalows on stilts from the winds and currents of the open sea.

Moorea offers the traveler an opportunity to walk, hike, or rent a scooter to enjoy the passing scenery. If you take the jeep safari, a 4×4 will drive you past plantations, across streams, into deep valleys, and up to waterfalls. If you prefer traveling on foot, it’s best to go with a guide along rain-forest trails.

Because the nearby isles are so attractive, many tourists use Tahiti as a stopover, though one should visit the Gauguin Museum, the market place, the gem museum, the pearl shops – as well as swim, snorkel, and feed sharks and fish in Tahiti itself. Speaking of the downtown market in Papeete, check out the stands with displays of luscious ripe fruits, Tahitian and Chinese vegetables, “monoi oil,” and scented soaps as well as vanilla beans, cakes and pies, fruit preserves, dance costumes, woven hats and bags and shell necklaces.

Over and over again in my travels in the Diaspora researching material for my recent book, The Scattered Tribe, I heard the name of Jerusalem uttered with awe, even in Tahiti.

I recall that once I asked Mrs. Sebbag, how she likes living in paradise in Tahiti, she replied, “paradise is only in Jerusalem.”