Filmmaker explores possibility of “Jewish Pirates of the Caribbean.” 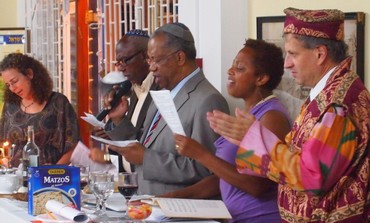 How was this year’s seder different from all other years at Shaare Shalom Synagogue in Kingston, Jamaica?

It marked the Passover debut of Rabbi Dana Evans Kaplan, who last September became the first full-time pulpit rabbi in 40 years for the Jamaican Jewish community—one of the oldest in the Western Hemisphere, as detailed in a 2011 story by JointMedia News Service.

Dressed as Elijah, Kaplan left before the door was symbolically opened for Elijah’s arrival, and circulated around the room shaking hands upon his return. Kaplan added that, “Some said they were concerned I might cause a hurricane!”

Kaplan’s arrival, along with his first Jamaican Passover experience, is just one of several new developments in the Jamaican Jewish community—whose presence dates back to the 16th century, when Jewish conversos settled in the tropical island during Spanish rule. The community now offers formal conversion classes, is surveying its ancient cemeteries, and is possibly on its way to becoming the featured location of a motion picture about its somewhat romanticized “Jewish pirate” heritage.

Jamaica’s Jews live mainly in or near the bustling capital city of Kingston, where Shaare Shalom’s whitewashed Dutch-style building houses a traditional Sephardic and sand-floored sanctuary, a Jewish heritage center, and a collection of tombstones in its garden dating back to the 17th century.

The putative leader or go-to man in Jamaica’s Jewish community is Ainsley Henriques, the descendant of 18th-century settlers in Jamaica that included the Henriques-Cohen brothers, whose exploits as pirates fighting the Spanish are legendary. He is also an accomplished historian, genealogist and preservationist, and he serves as Jamaica’s honorary Israeli consul.

This March, when 90 people at Shaare Shalom gathered to celebrate Purim with their new rabbi, Henriques was noticeably absent. He had been awakened in the middle of the night by an Israeli request for help in searching for a Zim Shipping Lines officer who was apparently lost at sea. The disappearance was ultimately ruled an apparent suicide, but the call kept Henriques up and busy assisting Zim, whose ships frequently call at Kingston Harbor, one of the closest major ports to the Panama Canal.

Despite his absence, the Purim party went on as planned, with Kaplan dressed as King Achashverosh—holding a real sword. Virtually all of the children present were dressed in costumes, ranging from superheroes to shepherds to Queen Esther. Synagogue President David Matalon came as Fred Flintstone. A couple days earlier, Kaplan co-led a Purim service at the Great Huts resort near Port Antonio on the northern coast, where Franz Katzir, a visitor from Washington, DC, read the megillah on a scroll he brought to Jamaica.

An ardent scuba diver, Kaplan has written about Cuban Jewry and penned his doctoral dissertation on conversion in early America. He expects to have formal conversion ceremonies in May or June for three students in his giur (conversion) program.

Jewish pirates on the big screen?

Jewish Jamaica was recently the destination of acclaimed filmmaker David C. Lewis, who visited as part of his exploration into making a movie based on the popular book Jewish Pirates of the Caribbean. The book was written by the late Ed Kritzler, who spent 30 years working and researching in Jamaica, and it chronicles much of the adventures and exploits of Sephardic Jews who made their way to the Caribbean to escape the Spanish Inquisition. Indeed, there were some actual Jewish pirates as well as explorers and adventurers, some of whom attacked Spanish treasure ships.

“I knew there was an interesting tale to tell, yet no idea what the details were,” Lewis said. “I was amazed by what Ed had pieced together regarding Jewish activity in pirating and privateering. I contacted him and I ended up getting an exclusive option to the rights to make a documentary based on his book.”

Lewis said his visit “helped me put some visual ‘real’ images to the words from Ed’s book and inspired me to continue to move forward in trying to get this documentary produced. It is an uphill battle in raising funds for the documentary project, but nevertheless I am confident a film will be done and I shall be returning to Jamaica.”

“My intention is to produce a documentary in a docu-drama style,” Lewis explained. “The film will contain location interviews with historical experts on various subjects including the Inquisition, pirates and privateers, Jewish life in Jamaica, and, of course, experts on the Jewish personalities themselves. This will be combined with on-location re-enactments in such places as Port Royal, Jamaica, Spain and Amsterdam.”

The American-born Lewis—who made aliyah in 1986—visited Kingston’s Hunts Bay Cemetery, where some of those who died in the Port Royal earthquake of 1692 are buried. He noted that, “The very ancient graves of earlier Jewish pioneers in the New World were found, including the sign of ‘skull and crossbones’ on some of the grave stones.”

In addition to Lewis, Jamaica’s Jewish community also recently hosted nearly 40 national board members and donors from American Associates of Ben Gurion University of the Negev (BGU), who visited the Hillel Academy, Port Royal, the National Gallery of Jamaica, the Bob Marley Museum, and other typical sites.

She described Jamaican seders from her childhood as alternating between communal ones in hotels and home seders with friends and family. “They were a tad tedious,” Adam said. “We have done much to enliven them since then. Coloring and activity pages with crayons were prepared for each table with kids this year. At any rate, things are definitely more kid-friendly now. We were to be quiet and sit still as best we could; disciplined… that is probably because of our British upbringing and our Sephardic traditions.”

Henriques recalled that during World World War II, when there was no matzah to be had in Jamaica, the community “used Cassava wafers instead.”

“Today, matzah for breakfast with Mango jam is a delight,” he said.

Kaplan—a.k.a. Elijah—spoke about trips to various Jewish communities and the unusual customs he found in Afghanistan, Cuba, and India, and how his current community is “developing a uniquely Jamaican Judaism.”

Studying the past and building for the future may sound cliché, but Jamaica’s Jews are doing just that. And if Lewis sees his project through, there will be another motion picture about the pirates of the Caribbean—but instead of “arghs,” you might hear some “ahoy veys!”

Purim Traditions Around the World