Playing Jewish Geography in Phnom Penh The redevelopment of a community

Phnom Penh is a small town, especially when you are an expat. It’s common to run into people you know at the coffee shop, the grocery store, the local pub… it seems once you are around long enough, you get to know most of the people worth knowing, despite the transient nature of the population. This is even truer of the Jewish community in Cambodia; it’s like an easy game of Jewish Geography. “Oh, do you know Sol who works at Save the Children?” “Yes, of course I know Sol, his children go to preschool with mine.” The game is almost impossible to lose. It’s fast paced and only concludes when everyone in the community is named.

Yet as connected as we are, there are two very distinct ways that Phnom Penh Jews practice their religion. In this town with such a small Jewish population, is there room for two different Jewish communities?

“The Jews in Cambodia are very progressive,” says Brad Gordon, one of the Jewish community’s informal organizers. “Many of them work for NGOs, they are very bright, have strong opinions, but also are very busy.” The informal Jewish community started getting together during the Jewish holidays in the mid-early part of the millennium decade. They conducted successful sedars and by 2008, the group began to get more serious. At that point, an organizing committee was formed to plan holiday events and Shabbat dinners. There was even talk about having a charter or creating a Jewish NGO. In 2008, the committee sponsored Rabbi Jill Jacobs, a Conservative rabbi from New York, to fly to Cambodia and lead High Holiday services. “People were extremely grateful this was organized,” says Brad, who personally handled a lot of the logistical heavy lifting. Brad’s experience as a board member of the Jewish Community Center in Tokyo before living in Phnom Penh gave him a good perspective and the right contacts to manage such an operation.

Around this time, Chabad started seriously considering opening a Jewish Center in Cambodia. Brad had been in touch with the Chabad rabbi in Bangkok, whom he says he maintains a very good relationship with. Chabad started researching a Phnom Penh option back in 2007 and during consecutive trips to Cambodia, Chabad representatives met with the informal committee. Alysha Beyer, a committee member at the time, said this meeting was extremely cordial, and the Bangkok rabbi was looking for ways to coordinate and support the continuing efforts of the Jewish community in Phnom Penh.

There were others on the committee who warmly welcomed Chabad into the fold, so much so that they felt holding committee meetings to decide what the Jewish community should do was frivolous. Chabad, they opined, would take care of this. Others on the committee saw Chabad as a resource, not a replacement for their own work.

At the end of 2009, Chabad opened the Jewish Center of Cambodia. Rabbi Bentzion Butman and his family became Cambodia’s first permanently staffed Chabad rabbi. The center, which functions as a shul, a kosher restaurant and food store, a beit midrash, and the rabbi’s home, is located on a quiet residential street in the heart of Phnom Penh. Rabbi Butman’s office is lined with bookshelves, and piled high with leather bound Jewish texts. When he speaks, as a good rabbi should, he does so with parables and analogies. He may be a young rabbi, but after studying in yeshiva for 16 hours a day for 10 years, he clearly knows his texts and loves to tell stories. 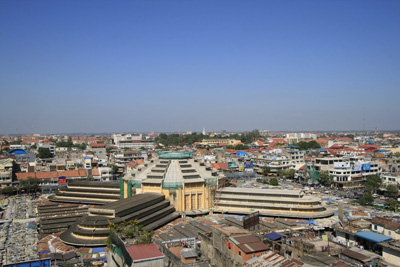 Rabbi Butman also brings with him to Cambodia the massive organizational skills of Chabad. He has a polished website, a slick email template, and a full online database of texts, midrashim, and religious resources. If you Google “Jewish Cambodia,” the first few results are for Chabad’s site. More relevant than that, there is now a community center, an actual place to meet for prayer. It is the rabbi’s full time job to find Jews in Cambodia and, as Rabbi Butman put it “reawaken the true essence within a person, have the Jewish spark within burn over the material shell of everyday life.” In other words, help people become more observant.

Despite what Chabad brings to the community, some people still prefer a more liberal service or feel uncomfortable with a mechitza dividing the men and women. “It is not for everyone,” some profer. Rabbi Butman has a practical view of the issue, and says this: “Someone who hasn’t grown up with all of the traditions may not be able to eat the whole meal right now; the food might be strange to you. That’s OK. Start with one serving, with one spoon.” It is a refrain new parents use often with their children: try it, you might like it. 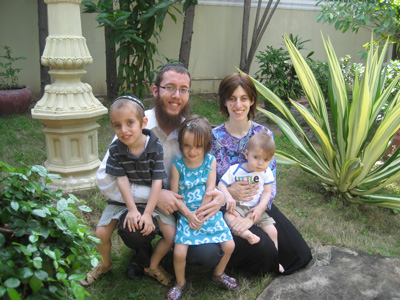 And yet… with Chabad as an option, the informal Jewish community has done little in the way of organizing events. The committee, who was so active in 2008, has found themselves disbanded; some committee members moved away from Phnom Penh, some are content with Chabad, and others find they are too busy with work and life to organize and promote events. Brad Gordon admits, “If we don’t organize, at least there is something going on.”

Alysha Beyer agrees, but takes it a step further. She has been organizing Jewish community events since her arrival in Phnom Penh in September of 2008 and in Zambia prior to that. Growing up attending Conservative Jewish day schools and having “lots of rabbis in the family,” gave her a strong sense of Jewish identity, and it is critical for her to pass these onto her children. Alysha acknowledges it’s difficult to motivate to plan a Jewish community event when half of Phnom Penh’s small Jewish population will be attending a competing event that same day. “It was just as easy for me to go to a Chabad event,” she says.

In 2008, when Brad, Alysha and the rest of group organized Rabbi Jill Jacobs to lead High Holiday services in a rented hall in Phnom Penh, the committee seemed poised on the edge of something big, something organic and wholly Jewish Cambodia. “It really felt like a strong Jewish community,” says Alysha of that time. The 2008 Chanukah party had about 60 people attending, and in spring of 2009 the committee organized an equally successful Purim party, complete with little Mordechais and Queen Esthers sitting down to learn about the holiday taught by Alysha. The committee’s 2009 Pesach sedar had over 30 people attending. In 2009, just prior to Chabad’s arrival, the committee again brought a rabbi from the U.S. to lead successful High Holiday services in a hotel conference room.

Fast forward to 2010, and the committee was no longer meeting, but Brad and Alysha did organize High Holiday services to be held at a member’s home, though they did not bring a rabbi to lead them. There was a small Chanukah gathering at the end of the year. In 2011, Chabad took the lead on both Pesach and Purim gatherings (among all of the other Jewish holidays). It is unclear whether the informal group will get together for High Holidays again in 2011. As of mid-September, nothing had been organized. Chabad started advertising Rosh Hashanah services in their weekly emails in mid-August.

Some might think that Chabad is responsible for the dismantling of the informal Jewish community. But this is an over simplification and simply incorrect. People move on. People are busy. People change. Chabad has a role to play, and is certainly busy in Cambodia. Rabbi Butman estimates that if current trends continue, he may have to bring on additional Chabad staff within the next two years. And yet… one can’t help but think that if Chabad had chosen not to put a center in Phnom Penh, the informal group would have continued to grow. This is neither good nor bad, right nor wrong. It is a different style of practicing Judaism.

When asked about coming to Cambodia, Rabbi Butman tells the story of his exploratory trip to Cambodia for Pesach in 2009. He and his wife were considering opening a center in California as an alternative to Phnom Penh. He knew that getting Jews to come to his center in California would take more prodding. In Cambodia, he says, the Jews are hungry for something spiritual, which is why the center continues to see constant patrons. “It’s like handing someone who has been wandering in the desert a cold coke,” he explains. “They are happy to have it because they have been without for so long.”

Jews Of Color Press For Acceptance