Rites of Passage: In Cuba, a Revival in Judaism Leads Some to Israel 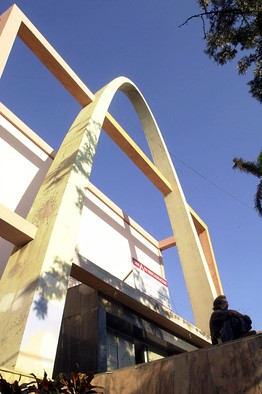 The revival in Jewish life in Cuba began in the early 1990s; above, Havana’s Patronato synagogue.

Like many young Cubans, 23-year-old Yosniel Castro wants an opportunity to leave this Communist-ruled island for a better life. Unlike many of his peers, he may have found a way out: Judaism.

Mr. Castro’s mother was a Catholic who married a Jew and converted to Judaism. She eventually left for Israel in 2007 with Mr. Castro’s younger sister. Now Mr. Castro, who isn’t related to Cuban leader Fidel Castro, hopes to convert and join them.

“It is my dream to do it, too,” says the young man, tugging at the fringe of a dingy white shawl, or tallit, and concentrating on the Sabbath services at the Centro Hebreo Sefaradi de Cuba, one of three active synagogues here.

While any Cuban, technically, is allowed to emigrate, very few get the required paperwork from the Cuban government or can raise the thousands of dollars required for documents and transportation off the island. Jews bound for the Holy Land, however, can expect to have those fees paid by Israel.
[The revival in Jewish life in Cuba began in the early 1990s; above, Havana’s Patronato synagogue.] Associated Press

The revival in Jewish life in Cuba began in the early 1990s; above, Havana’s Patronato synagogue.

The prospect of emigration is helping fuel a revival of sorts in Judaism in Cuba after a half-century of Communism. With as many as 30,000 Jews in the period just before World War II, Cuba’s “Hebreo” enclave withered to around 1,000 individuals by the late 1980s. It’s up to almost 1,500 today — with hundreds of other recently departed Cuban Jews now living in Israel or Florida. For this community, that’s a population explosion.

“I would be less than honest if I didn’t tell you that some people want to be Jews because it offers them the chance to leave,” says Samuel Zagovalov, a 62-year-old former oil-refinery technician who directs Sabbath services at the Sefaradi synagogue here on Saturday mornings.

The journey from Havana to Jerusalem, however, isn’t easy. The process of converting to Judaism takes years and includes being approved by a council of elders at the synagogue and then an ordained rabbi. Since Cuba has none, usually converts have to wait for a visiting rabbi from Israel, Argentina or Chile. Last but not least, male converts have to submit to a ritual circumcision. In 2007, dozens of adult Cuban men underwent circumcision as part of their conversion process.

Not anyone can just walk into a synagogue and get a ticket out of Cuba. Usually, one needs a Jewish mother to be allowed into the fold. But the rules seem somewhat flexible: Mr. Castro, for instance, is becoming Jewish because his mother, 41, married a Jew — the former head of the Sefaradi synagogue, Jose Levy, who is in his 70s.

Mr. Zagovalov, the current religious director of the synagogue, considers the rising interest in Judaism a good thing, no matter how it comes about. For the first time in decades, more Jewish babies are being born in Cuba than elderly members are dying, he says. Bar mitzvahs also are on the rise — there were eight in 2008, after years in which one, or none, was the norm.

According to the Canadian Jewish Congress, which delivers Passover supplies each spring for dispersal across Cuba, requests for matzo now come not only from Havana’s three synagogues, but also from other congregations in Cuba, including ones in Santiago, Cienfuegos, Camaguey and Guantanamo.

Luis de Torres, the interpreter Columbus took on his first voyage in 1492, is believed to be the first Jew to visit Cuba. The biggest migration of Jews to Cuba was during the 20th century from Eastern Europe.

The revival in Jewish life here began in the early 1990s, when the Communist Party lifted the ban on members practicing religion. That brought 37-year-old Tatiana Asis, whose father was a Communist Party member, to the Sefaradi synagogue, along with two older brothers, Alberto and Moises.

Tatiana and her brothers were born to a Jewish father, but nonetheless had to undergo a lengthy process of training in order to be considered full members of the synagogue. Both brothers have since left Cuba, with Alberto living for a time in Israel, before both men settled permanently in Miami.

The numbers of people interested in rediscovering their Jewish roots picked up in the mid-1990s, when “Operation Cigar” moved 400 elderly Havana Jews to Israel.

Although barely known at the time, Operation Cigar was a three-sided arrangement between Cuba, Israel and Canada. Since Israel and Cuba cut diplomatic relations during the 1973 Yom Kippur War, Canada processed the emigres’ paperwork and provided a landing spot for the Cubans unable to reach Israel directly. Israel’s Jewish Agency picked up the tab. Traditionally, Israel or private Jewish philanthropies have paid immigration costs for Jews from isolated places, such as Ethiopia, to demonstrate that Israel is a haven for Jews from every corner of the world, no matter how poor.

The “Cigar” exodus was followed by Fidel Castro’s surprise attendance at a Hanukkah Party at Havana’s Temple Bet Shalom in 1998, another sign his regime was encouraging Jews to return to temple. In the decade since, another 1,000 Cuban Jews emigrated to Israel, says William Miller, a dual Israeli-Cuban citizen who works at Bet Shalom.

Religious classes at Bet Shalom are packed most weekends, with students often coming from distant provinces to cram Hebrew lessons and prepare for bar mitzvahs.

Isaac Ben Zvi Zabicki, 56, like others, is rekindling his interest in Judaism and studying at Bet Shalom for an official conversion. Born of a Jewish father and Catholic mother in Mexico City, he came to Cuba as an infant when his parents separated. He grew up relatively privileged, excelling in sports and coaching Cuba’s national rowing team in the 1993 Pan American Games. Today he heads Cuba’s sailing federation.

Mr. Zabicki says his elderly father and three half-brothers live in Israel, and that he wishes to see them. He is married to a Cuban woman of African descent, who also is training as a converso. They hope to leave for Israel within a few years. “It’s a personal decision for us,” Mr. Zabicki says.

Since 1992, Bet Shalom has had a rotating troupe of mentors from Argentina, often rabbinical students, who usually commit to a two-year stint, instructing younger members of the congregation as well as conversos. The latest mentor, Fernando Lapiduz, hails from Rosario, in Argentina’s grain belt.

In 2007, his first year in Havana, Mr. Lapiduz converted 71 Jews, including nearly two dozen adult men. They were required to submit to ritual circumcision by an ordained mohel whom Mr. Lapiduz imported from Argentina. “He did them all in one week,” says Mr. Lapiduz proudly.

Mr. Zabicki was lucky — he was circumcised in Mexico a week after his birth. “For those older guys…Well, it was a pretty complicated operation,” he says with a grimace.

Yosniel Castro, whose mother and sister emigrated to Israel, now waits for a chance to apply for a visa, pending his successful conversion. Until then, he works as a janitor at a compound where he used to be a student. Mr. Castro’s mother, Maria Lores de Levy, does similar work, cleaning homes in Beer Sheva, the city near Gaza where Israel’s Jewish Agency runs a center for immigrants from Latin America.

As Mr. Castro’s mother can attest, life in Israel can be as hard as life in Cuba. A significant number of the conversos who emigrated have left Israel, Cuban Jews say, most relocating to the U.S. or Canada. The difficulty of learning Hebrew is one barrier to a better life.

Then there’s the violence. A day after Israel launched its attack on Gaza, Maria Lores, Mr. Castro’s mother, applied for a visa to Canada. “My situation has grown very uncomfortable now. Without language, without knowing how this nightmare ends,” she wrote in an email. “I have no idea why God permits these things.”