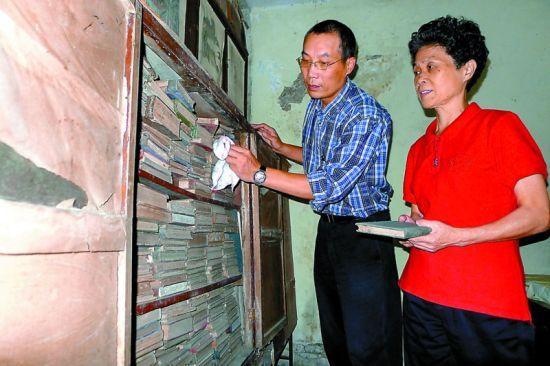 From 1933 to 1941, around 30,000 Jewish refugees fled the holocaust in Europe for Shanghai. One of the city’s refugee sections, in Hongkou District, will be pulled down within days, to make way for new residential apartments. A Shanghai family that has lived in the district for decades has been looking after over 2,000 books for a Jewish refugee for 70 years. Now the family is asking for help locating their owner.

The final days of a historical community. With the area soon to be demolished, residents have begun moving out. Pan Lu, who recently found a new home for the 2,000 books, brought us to the place where they were kept for 70 years.

Lin Daozhi, the school principal who was entrusted the books, died in 1981. But the book owner never returned. It was no easy task fitting them all in, especially in a house less than 100 square meters. Over 10 family members have lived here, but none have ever thought of dumping the books to make more space.
“My son has been sharing the room with us, and slept on this soft bed until he was 16 years old.” Pan said.

Looking after the books has become a tradition for the Lin family. They sealed them up in 1993 to better preserve them.

Sun Lide, Lin Daozhi’s Grandson, said, “We put the books in order, then glued and nailed the wall to prevent rats and worms from damaging them.”

And their efforts paid off. When the wall was opened after twenty years, most of the books were still in good shape.

“I worried a lot before opening the wall. But I was very relieved to see them in good condition.” Sun said.

Demolition plans set the clock ticking to find the books’ owner. Just before moving out, Pan Lu found a letter Carl Anger sent from Germany to her late parents-in-law. “We arrived safely … and we’re happy to be reunited with our relatives,” the letter read.

“I never thought that I would find a postcard with the picture of Carl and his wife Paula.” Said Pan.

Thanks to this new clue, the Lin family feel that they are getting closer to their goal.
“We hope that Carl and his family can contact us. The books belong to them, and when they get them back, our family’s mission will be complete.”)

The Shanghai Jewish Refugees Museum has contacted the German Consulate-General in Shanghai to locate the Anger family. The Israeli Embassy has also offered its help.

Chen Jian, Director of Shanghai Jewish Refugees Musuem, said, “Life was hard at the time, but the Chinese people helped the Jewish refugees as much as possible. And the two peoples built up close bonds and deep trust.”

The books are being kept in a local library until their owner is found.