Syria’s oldest synagogue, dating back at least to the Middle Ages, now lays in ruins destroyed by President Bashar Assad’s forces according to rebels who spoke to The Daily Beast in a report published Tuesday.

The Eliyahu Hanabi Synagogue in the Jobar neighborhood of Damascus was apparently bombarded by the Syrian military in what rebels are calling the ‘scorched earth tactics’ of their enemies. 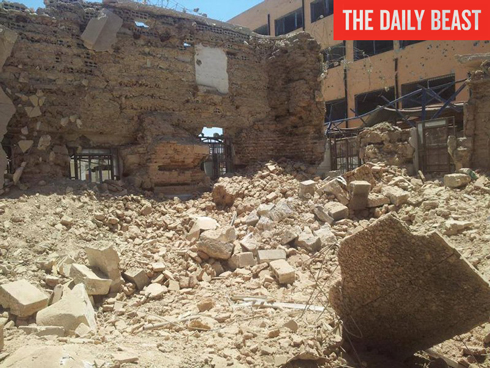 The most conservative estimates say that the synagogue is at least 400 years old and housed hundreds if not thousands of Jewish religious artifacts that remained in the building through last weekend’s bombing meaning that the relics were most certainly destroyed.

As one of Damascus’ few remaining neighborhoods under opposition control, Jobar has been under constant siege for months and there was no evidence that the holy site was specifically targeted at the time of the Daily Beast report.

Whether purposeful or not, the Daily Beast hinted that the synagogue is far from the only cultural and religious casualty in Syria’s civil war.

“This is hardly the only place of worship to be destroyed by the Assad regime,” a member of the Syrian American Council Shlomo Bolts told The Daily Beast.

“The Umm al-Zinar Church (a house of worship in Homs that locals say dates back to the first centuries of Christianity), the (1,400-year-old) Khalid Ibn Walid Mosque, and countless other irreplaceable cultural sites are now lost to history due to a dictator’s manic desire to keep power at all costs,” Bolts told The Daily Beast.

Apparently built on top of the cave where the Prophet Elijah hid from those who wanted him dead, the synagogue served an abundant community of Jews in the Middle Ages and after the founding of Israel was converted into a school for Palestinian refugees.