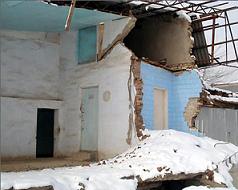 Dushanbe, Tajikistan – In a pressing issue that has virtually dragged on for years now, the Jewish community of Tajikistan – a member of the Federation of Jewish Communities of the CIS – remains gravely concerned about the fate of its only Synagogue. As reported in previous news stories, the new master plan for the city of Dushanbe – Tajikistan’s capital – entails that the city’s historic Synagogue be demolished.

Jewish leaders have visited Dushanbe to meet with both municipal and national officials with respect to this critical issue. Among them, Chief Rabbi of Uzbekistan Dovid Gurevich visited Tajikistan in June 2004, at which time Dushanbe Mayor Mahmadsaid Ubaidulloyev suggested a plot to be allocated free-of-charge for construction of a new Synagogue.

Not only does the local community have to raise the funds for construction of this Synagogue, but so too is this particular plot located in an undeveloped part of the city, near the River Dushanbinka, which entails additional expenses for its development. Since that time, there have also been subsequent delays due to various other hang-ups which have left the Jewish community of Tajikistan still without a home.

Tajikistan is currently home to nearly 350 Jews. While not all of them are religious or attend prayers, many of them still recognize their national and ethnic heritage and the Synagogue remains both a practical and symbolic unifying entity. Unfortunately, the Dushanbe Synagogue is today in a deplorable condition and because this one-storey building stands among ruins caused from the deconstruction process of its adjacent buildings, this factor deters local residents from coming out to visit the Synagogue. The only sign indicating the significance of this formerly active Jewish Synagogue is a six-pointed star on its gate.

The fact is that the local Jewish community is rather impoverished. The construction of a new Synagogue in Dushanbe would only be possible through the sponsorship of donors elsewhere in the world.