The Jewish heritage of ‘New Scotland’

Nova Scotia is a source of a considerable Canadian history, and a gateway for European immigrants, much like Ellis Island. 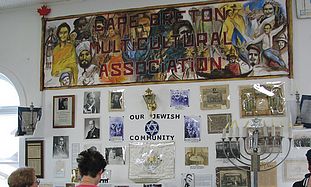 Nova Scotia is a visual and cultural treat for anyone looking for a unique Canadian adventure. Situated among the Atlantic Maritime provinces along Canada’s eastern seaboard, it offers a unique blend of natural scenic wonders and strong Celtic cultural influences. Nova Scotia – Latin for New Scotland – is also a source of considerable Canadian history. Although European settlements were established by both the French and British in the early 17th century, British influence proved more enduring, particularly after the 1749 founding of Halifax.

Tens of thousands of Scots, English, Irish and Welsh arrived in Nova Scotia in the early 19th century.

This European influx was augmented by thousands of United Empire Loyalists – former soldiers and refugees who remained loyal to the British crown – who fled the American Revolution to settle in Britishruled Canada. Many ended up in Nova Scotia, especially the island of Cape Breton, where coal and steel industries were prominent.

From the 19th century and well into the 20th, more Europeans arrived on Canada’s eastern shores, including Jews from Poland, Lithuania, Germany and Russia.

Much like New York, Halifax served as the gateway for European immigrants entering Canada, and much like New York’s Ellis Island, Halifax’s Pier 21 was Canada’s major point of entry between 1928 and 1971.

Arriving by sea, about a million and a half immigrants passed through the pier before they settled in towns and cities across the nation, and, in the process, enriching Canada’s cultural mosaic.

Among these new immigrants to Nova Scotia were my father, Dr. Edward Wolak, his younger brother Irv and their parents Jacob and Rosa. Having survived the Holocaust in Poland, they arrived in Canada in the 1950s after changing their surname from Wohlman to Wolak in response to prevailing postwar Polish anti- Semitism.

Reaching Pier 21 after a very bumpy winter’s journey across the Atlantic Ocean, they went west like most new arrivals in Canada – in my family’s case, heading for Vancouver, after a stop in Winnipeg to visit relatives who had emigrated prior to World War I from the shtetls of the eastern Austro-Hungarian Empire.

No longer a port of immigration, Pier 21 now serves as Canada’s Immigration Museum. Full of fascinating exhibits and personal stories documenting Canada’s diverse immigrant communities, casual visitors, history buffs and those in search of their family roots will find Pier 21 of considerable interest. There are many interactive displays as well as learning opportunities for immigration and family research.

Beyond Pier 21, Halifax has many other fascinating and worthwhile sites to see, including the impressive and imposing Citadel.

A strategic hilltop British military base constructed in the 1740s to repel the French and secure Halifax’s burgeoning harbor, it grew over the ensuing decades to defend against potential land-based invasions from the US. These days, Halifax’s Citadel is a peaceful Canadian national historic site attracting tourists the world over who come to visit the Army Museum and see authentically dressed actors portraying imposing kilt-wearing soldiers of yesteryear, revisiting an age when Halifax was a major garrison in the British Empire.

Although Nova Scotia is not one of Canada’s most populous provinces – this distinction goes to Ontario and Quebec – it was among Canada’s first four provinces at the time of the country’s founding in 1867 (today there are 10 provinces and three territories).

However, not all immigrants who arrived at Pier 21 left for other parts of the country. Many stayed in Nova Scotia, especially Halifax, including a Jewish community that remains just under 2,000.

Although modest in number, the Jews of Halifax proudly represent the largest Canadian Jewish community east of Montreal.

Significant traces of Jewish history can be found in Halifax, especially along Oxford Street. While perhaps a dozen Jews inhabited Halifax at its founding, a formal community with Jewish infrastructure and Jewish organizations did not take shape until after Canadian Confederation in 1867.

In 1894, Halifax’s Baron de Hirsch Congregation, at the corner of Starr and Hurd Streets, was the first Orthodox congregation established east of Montreal.

The devastating Halifax Explosion of 1917 caused the destruction of the Halifax synagogue (though its Torahs survived). After relocating a number of times, the shul ultimately established itself, in 1957, at the corner of Coburg Road and Oxford Street, where it remains under the new name, Beth Israel Synagogue.

Established in 1953 to serve Halifax’s growing Conservative Jewish community, Sha’ar Shalom provides its members and visitors egalitarian Shabbat and holiday services. In 1995, Chabad came to downtown Halifax to serve its Jewish community, including the large unaffiliated student population at Dalhousie University and smaller Jewish communities throughout the Maritimes.

Tourists should venture beyond the urban center of Halifax northeast towards the rustic and scenic Cape Breton Island. No trip to Nova Scotia is complete without a stop in Cape Breton, with its colorful fishing villages and traditional Celtic music. Although Celtic culture remains dominant, a remnant of Maritime Jewish history can still be found there.

Cape Breton, once a thriving center of Jewish culture, has declined significantly in recent decades, largely due to domestic migration. The only functioning synagogue is Temple Sons of Israel on Whitney Avenue in Sydney, the largest city on the island. This past summer, Cape Breton’s oldest synagogue, Glace Bay’s Congregation Sons of Israel, permanently closed its doors. The old coal mining town of Glace Bay no longer had enough men to form a minyan in this former Orthodox shul. Seeking a more urban existence, the Jewish population dwindled over the years as children and grandchildren of the original Eastern European Jewish settlers moved to Halifax and to cities across Canada.

After more than a century of service to the community, the Glace Bay synagogue’s menora, Torah ark and other artifacts were transferred to nearby Sydney.

Whitney Pier Historical Museum, situated in one of the more scenic areas of Sydney’s Cape Breton County, is well worth visiting.

Established in 1988, the museum houses a collection of photographs, paintings and old newspapers relating the history of Whitney Pier, all preserved in a building that was once a large synagogue – Adath Israel – which closed in 1986.

Constructed around a former steel plant, Whitney Pier had been home to a diverse ethnic community – including many Jews – who came to work in Cape Breton’s industries. The museum features a full wall devoted to the Whitney Pier Jewish community. As a testament to the mix of ethnic groups, one can still find tartan kippot for sale in the museum.

The writer is a freelancer and photographer in Vancouver.