The Last Jew of Calcutta 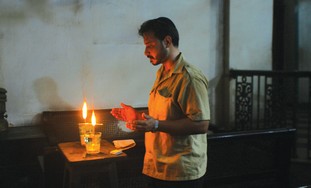 The cemetery is the one place in Calcutta where Jews are the majority.

I FINALLY MEET UP WITH SHALOM ISRAEL ON FREE School Street, near my hotel. His name always comes up when I speak with Jews in Calcutta. There are not many left – three dozen maybe. Almost all of them are elderly. Israel, at 37, is not. That’s why his name comes up.

There are other reasons, too. He visits the sick and the poor, washes the bodies of the dead and cares for the graves of the dead. And he lives in the Jewish Cemetery with the dead.

It takes a while for all of this to sink in. Israel is paid from a Jewish community social welfare fund for his work. It’s his only source of income. But how does one assess the worth of a man who does hospice work for a dying community, whose responsibilities extend to the vast parts of it that no longer even exist? The Jews of Calcutta, whose descendants first arrived from Syria and Iraq in the late 18th and early 19th centuries, numbered around 5,000 before World War II. During the violence of Partition in 1947, in which British India was divided into the then-Dominion of Pakistan (later Pakistan and Bangladesh) and India, the Hindu-Muslim carnage was worse in Calcutta than in most parts of India. That violence, together with the creation of the State of Israel in 1948, sent great numbers of Indian Jews into a migration to the West.

That downward spiral was never reversed.

I see Israel approaching from the direction of Nahoum & Sons Bakery at New Market. Built by the British in 1874, New Market is an indoor hive of tiny shops, touts, alleyways and hustle. It’s like the Old City of Jerusalem, but without the impediment of any Holy Places.

Tipsy with consumerism by day, by night the ground outside New Market becomes a twitching, sprawling bedroom for hundreds of Calcutta’s homeless, most of them young men.

Nahoum’s is owned by the community’s patriarch, David Nahoum, who, at 90, maintains the welfare fund and heads most of the Jewish community, but delegates the tasks of selling plum cakes and distributing funds for the needy to his associate, Mr. Hulda, a Hindu.

Israel had been visiting with Hulda.

ISRAEL AND I GREET EACH OTHER WITH IRONIC flourishes, finally getting together after many fruitless phone calls over many days. Once, I had tried to visit him at the cemetery, but he was in town lighting candles and saying prayers at Calcutta’s three synagogues, which he does every Friday prior to the start of the Sabbath. Services are no longer held in the synagogues – it is impossible to bring together 10 elderly, frail and ill Jewish men for a minyan.

“When we come together as a community, it is for funerals,” Israel says, smiling dryly. His smile travels slowly beneath his black mustache.

He is slow moving, and his body is slightly stooped, as if in solidarity with his clients. You half expect him to turn gray before your eyes.

“What is it like living in a cemetery?” I ask him. The question flies out of me, autonomously.

He doesn’t flinch. “It’s no big deal. I have a house there. In this life, it’s the living who will harm you, not the dead. Besides, the cemetery is the one place in Calcutta where Jews are the majority.”

What must it be like, I wonder, to emerge every day from death to life, from gated silence to the signature shriek and honk of Calcutta’s 12 million (or more) residents.

I know he is single. Does he bring women home at night? I don’t dare ask. How does he answer the question, “Where do you live?” Maybe he just smiles, says nothing. The sound of a gate opening in the moonlight would hold promise. But then what? Can romance blossom among headstones? Why not? Astory to tell at parties forever and ever.

Israel has come to Eastern Diagnostics, a storefront clinic on Free School Street, to assist a 90-year-old Jewish woman who fell and broke her femur. She is being treated by a doctor inside.

He emerges pushing a wheelchair. Inside a floral-patterned housedress is a woman the size of a bird – a very white, trembling, Israelite bird.

Israel lifts her from her chair onto the high seat of a hand-drawn rickshaw that will ferry her and her broken femur through the raging, clotted, early evening traffic.

Am I dreaming? I wonder. It’s a thought I have often in Calcutta. A woman who looks like my mother is being loaded onto a rickshaw pulled by a scarecrow? I won’t allow myself to feel frightened for her, because I don’t want to feel silly when I wake up.

Israel, wheezing in his black trousers, is trotting beside her, as if he were yet another vehicle in the traffic. Calcutta is no shtetl, but I see Israel as a frayed, dislocated, Chagall-like figure, blown by mystical elements into the polluted air of West Bengal.

I catch up with him later at a second clinic, the size of our old candy store in the Bronx. We sit across a table from one another as a second doctor is busy examining the old woman’s femur.

“Every Jew I speak to, it seems, is plotting to get you to go to Israel at some point,” I tell him.

“I know.” He heaves the sigh of a man being pressured by his family to enter into an unwanted marriage. “My younger brother, Mordechai [who is 35] is in the process of making aliya.”

He has a younger sister, Matanah, 32. She married and divorced a Hindu, and is estranged from the Jewish community. The three Israels are the only young Jews in Calcutta.

“Sure, I could go to Israel. Probably, I could find a job there, maybe on a kibbutz. But why should I go? What could I contribute there? Here, the community needs me. And the community is what’s most important.”

I ask him, through the heat and the street noise, and because I have let a decent amount of time elapse, “Can you imagine yourself as the last Jew of Calcutta?” “Yes,” Israel says without any hesitation, as if he had been waiting for that question.