The miraculous story of the Jews of Zakynthos 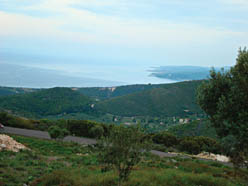 ZAKYNTHOS, Greece – I needed a break at the end of a long and exhausting semester. My family was off to the southern end of the Balkan Peninsula, to an unknown island in Greece . I decided to join them.

We flew from Tel Aviv to Athens. From Athens, towards the famous sunrise of the eastern isles, we landed on the island of Zakynthos – “Fiore di Levante” (Flower of the East) – which is also known by its Italian name – Zante.

During the ride, I read the travel guide, and learned a little about the history, the agriculture, the weather and finally about the poetic origins of the national anthem. I did not read one word about what I was really about to discover on the island.

The drive from the airport to our villa lasted a few minutes. From the coastal plateau, we drove up through twisted village bends to our destination.

An old lady, a typical Greek villager dressed all in black, welcomed us with a warm smile into her home. She asked to show us around her beloved mansion. It was obvious that this place was the source of her pride.

The landlady gave us a short tour of the old-style bedrooms, bathrooms and salon. In the kitchen, we noticed the beautiful authentic Greek dishes that were hanging over her antique-looking stove. All these were for our use.

We explained to her that for religious reasons, unfortunately, we would not be able to enjoy using her kitchenware and that we had brought our own.

This is when it all began.

She seemed confused. She looked at my dad and suddenly her eyes lit up. She noticed his kippa (yarmulke). We were asked to follow her out to the garden.

From the high point where we were standing, we saw a fantastic view of the ocean and the ships. But she pointed the other way completely.

“Look over there!” she said.

She wanted to know what we saw.

“Look again and focus!” she demanded.

“Something unidentified that looks like teeth, white dots,” my dad said.

She stared at us for a long moment and said: “That is the Jewish cemetery.”

I was shocked. We were all astounded. Here were were on an isolated island in Greece. Who ever heard of Jews here?

I tried reminiscing about stories and experiences I had heard from friends who had visited here. Nothing came to mind.

From this moment on until I left Greece, the relaxing summer holiday drinking ouzo on the beach became a fascinating journey. By the end of it, I uncovered an unforgettable story.

The next morning, I got on my rented moped and drove to the cemetery. The shudder that went through me started when I first saw the Star of David on the little black gate. The trembling grew as I walked in. It was a huge cemetery containing hundreds of graves from the 16th century up until 1955. The grounds were well-kept and little stones were set on many graves, as if they had had visitors recently.

1955. I thought for a moment. Whoever knows the history of Greece and its islands even faintly knows that there was no place struck harder by the Nazis.

Rhodes, Corfu, Salonika, Athens. The loss of Jewish life in Greece was devastating.

From 1944, there were almost no Jews left even in the bigger communities.

I did not, however, understand the meaning of the “1955” grave, and decided to investigate.

In a small house that stood in the heart of the property, I found the cemetery keeper, a third generation of custodians of the Jewish graveyard in Zakynthos. My inability to speak the language prevented me from having a deep conversation with him.

I sought to continue my search for the Jewish history of this town, and within five minutes I was at City Hall.

When I told the clerk at the front desk what I was after, he asked if I had already been to the synagogue. The question was posed casually, as though it’s asked on a daily basis.

“Excuse me?” I thought I hadn’t heard right. “A synagogue on this island?”

He gave me directions.

The synagogue was located on a busy road in the center of the island. Off the main street, in a space between two buildings, was a black iron gate, just like the one I had seen not long ago at the cemetery. Above it was a stone arc with an open book.

It read, in a loose translation from the original Hebrew, “At this holy place stood the Shalom Synagogue. Here, at the time of the earthquake in 1953, old Torah scrolls, bought before the community was established, were burned.”

Through the locked gate I saw two statues. Judging by their long beards, they looked to me like rabbis. The writing on the wall proved me wrong: “This plaque commemorates the gratitude of the Jews of Zakynthos to Mayor Karrer and Bishop Chrysostomos.”

What was the acknowledgment about? Who were these people? Why the statues? What happened here? I had lots of questions. I had to find a lead, if not an answer. I returned to City Hall, excited and trembling.

I approached the clerk, who already recognized me, and started questioning him about what had happened here. He referred me to the mayor’s deputy on the third floor. I found his room, knocked at his door and asked him if he would spare me a few minutes. He willingly accepted.

HALF an hour later I came out with this:

On September 9 1943, the governor of the German occupation named Berenz had asked the mayor, Loukas Karrer, for a list of all Jews on the island.

Rejecting the demand after consulting with Bishop Chrysostomos, they decided to go together to the governor’s office the next day. When Berenz insisted once again for the list, the bishop explained that these Jews weren’t Christians but had lived here in peace and quiet for hundreds of years.

They had never bothered anyone, he said. They were Greeks just like all other Greeks, and it would offend all the residents of Zakynthos if they were to leave.

But the governor persisted that they give him the names.

The bishop then handed him a piece of paper containing only two names: Bishop Chrysostomos and Mayor Karrer.

In addition, the bishop wrote a letter to Hitler himself, declaring that the Jews in Zakynthos were under his authority.

The speechless governor took both documents and sent them to the Nazi military commander in Berlin. In the meantime, not knowing what would happen, the local Jews were sent by the leaders of the island to hide inside Christian homes in the hills. However, a Nazi order to round up the Jews was soon revoked – thanks to the devoted leaders who risked their lives to save them.

In October 1944, the Germans withdrew from the island, leaving behind 275 Jews. The entire Jewish population had survived, while in many other regions Jewish communities were eliminated.

THIS unique history is described in the book of Dionyssios Stravolemos, An Act of Heroism – A Justification, and also in the short film of Tony Lykouressis, The Song of Life.

According to tour guide Haim Ischakis (see box), in 1947, a large number of Zakynthinote Jews made aliya while others moved to Athens.

In 1948, in recognition of the heroism of the Zakynthians during the Holocaust, the Jewish community donated stained glass for the windows of the Church of Saint Dionyssios.

In August 1953, the island was struck by a severe earthquake and the entire Jewish quarter, including its two synagogues, was destroyed. Not long afterwards, the remaining 38 Jews moved to Athens.

In 1978, Yad Vashem honored Bishop Chrysostomos and Mayor Loukas Karrer with the title of “Righteous among the Nations.”

In March 1982, the last remaining Jew in Zakynthos, Ermandos Mordos, died on the island and was buried in Athens. Thus the circle of Jewish presence came to its close after five centuries.

In 1992, on the site where the Sephardic synagogue stood before the earthquake, the Board of Jewish Communities in Greece erected two marble memorial monuments as a tribute to the bishop and mayor.

A FEW days before I had planned to leave the island and return home, I went into a bank to convert some dollars into euros. But even in a simple place like a bank, I managed to add another piece to this Jewish puzzle.

A clerk who had been on the phone and eating a sandwich, called on me when my turn came. When I gave her my dollars to be changed, she handed me the converted money in an envelope without asking for any identification.

Later on, when I opened it, I was surprised to see so much money.

The money that had been put into the envelope had not been counted properly, and instead of changing $1,000, she had given me the equivalent of $10,000!

This was really no surprise to me, because the clerk hadn’t paid me any attention. Ultimately, however, once the bank realized that the money was missing, it would have no way of reaching me since no contact information was requested.

The following morning, I called the bank and asked to speak to the manager. I inquired to know if there was a problem with the previous night’s accounts.

“You must be the woman with the dollars,” he said, immediately inviting me to his office. An hour later, I was at the bank. When I walked into the office, the man sitting across from the manager moved to another chair and gave me his seat.

I shared my bank experience with him, saying how easy it would have been for me to disappear with the money.

The manager himself was profusely apologetic about the unprofessional way I was treated and thanked me repeatedly for returning the money.

To express his gratitude, he invited me and my family to dinner at an exclusive restaurant. I explained that eating out was too complicated for us due to the fact that we were observant Jews.

He asked for my address so he could send us a crate of wine.

I told him I had come from Israel a week ago for a holiday, but had gotten sidetracked.

“A few days after I landed, I was surprised to discover the Jewish community that was here up to 25 years ago,” I said. “You don’t owe me anything. Indeed, you have given me and my people a lot. The least I can do as a Jew to show my appreciation for what you have done for the Jews of Zakynthos is to return this money that doesn’t belong to me and say, ‘Thank you!'”

There was silence for what appeared to be a long minute.

The man who had given me his seat when I walked in and hadn’t said a word during the conversation, stood up with tears in his eyes, turned to me and said:

“As the grandson of Mayor Karrer, I am extremely overwhelmed and want to thank you!”