Avin Gangte’s life has been uprooted – twice. First voluntarily, from his birthplace, second on gov’t orders, after building a home in Israel. 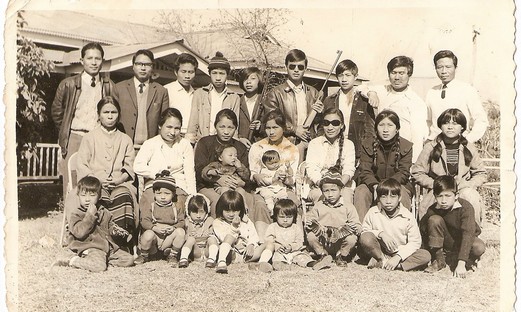 Avin Gangte was born in 1961 in Imphal, capital of the Indian state of Manipur, the third of seven siblings.

His father, Gamliel (born Jampee Kaimang), was a state government representative, a position that allowed the family a comfortable, if hardly luxurious, lifestyle, but deprived it of a father for days at a time. Gangte’s father – who would later serve as president of the northeast Indian community in Israel – spent much of the week traveling among remote villages in the service of the Manipur government, returning home only on weekends.

“Most of the people in our area were Christians, courtesy of the British,” Gangte says in the impeccable English that is another legacy of the Raj, “but in the late ’50s and early ’60s, people started looking into their roots. They started asking questions like ‘Why do we have so many customs that closely resemble Judaism?’” Gangte was 15 or 16 when his family began discovering its own Jewishness.

“My mother was the driving force in our family regarding our faith,” he recalls. “She was never satisfied until she came to Judaism and said, ‘Here I’ve found my real roots, the real answers.’ Then she stopped searching.”

The Gangtes and other families in Manipur and neighboring Mizoram would soon begin calling themselves Bnei Menashe, after the Israelite tribe, lost to history in the late First Temple period, from which they claim descent.

The Bnei Menashe say their folklore contains references to a legendary ancestor named “Manmasi,” that their songs describe the Exodus from Egypt and longing for Zion, and that on encountering British missionaries they were already familiar with certain events in the Hebrew Bible. “We claim we are descendants of Menashe because of our customs, culture, traditions and folklore, which are so similar to Judaism,” Gangte says.

As the community coalesced around its newfound faith, Gangte’s father – already in a leadership role by virtue of his government post – was elected its leader.

His status meant the family was among the first Bnei Menashe to set foot on Israeli soil, with the assistance of Rabbi Eliyahu Avichail – a tireless seeker of the lost tribes who was convinced of the Bnei Menashe’s Jewishness and who raised funds to facilitate their immigration.

But it would be 10 years before the Chief Rabbinate recognized the community as Jews, and most Bnei Menashe – the Gangtes included – initially arrived on tourist visas.

In April 1995, Avin Gangte, now married to Hagit (they were next-door neighbors in Imphal) and the father of two children, landed in Israel.

“It was like coming home,” he says, “but still totally different from what we were used to. It was all sand, and the heat was something we had never experienced before.”

The family’s first stop was the Gush Katif settlements of the Gaza Strip.

“They took us to a hothouse – the first time in my life I had been inside one. It was 50 or 52 degrees,” Gangte says. “We had to work in a cabbage field. At the end of the day, I used to fall on top of the vegetables and just lie there. After a week I said, ‘If I can help it, b’ezrat Hashem, I won’t go inside of one of those things again.

Baruch Hashem, since that day I haven’t gone inside a hothouse,” he says, grinning.

Gangte holds two degrees from Manipur University, including a master’s in history. Had he stayed in India, he says, he might have become a history teacher. In Israel, his lack of Hebrew – and of residency status – meant his immediate concern was paying the bills.

“I came here as a family man, and not as an oleh hadash [new immigrant] but as a tourist,” he says. “First priority was making ends meet.”

From the hothouse he switched to gardening, a profession and passion he pursues to this day.

As a newcomer to Gush Katif, Gangte says he was never made to feel like an outsider.

“Relationships with the local people were very caring,” he says. “They were very welcoming and friendly, and accepted us as long-lost brothers coming home.”

The family lived in Neveh Dekalim for 10 years, until the 2005 disengagement from Gaza.

“You’ve finally started to settle down in a real home,” he recalls, his voice trailing off. “It was more or less all of a sudden. We had heard about the disengagement but we refused to believe it. We thought it wouldn’t really happen.”

But the same year also brought encouraging news to the Bnei Menashe. Ten years after the Gangtes’ arrival in Israel, Sephardi Chief Rabbi Shlomo Amar recognized the Bnei Menashe as remnants of the lost Israelites. The extended family – most of whom were by then in Israel – completed a giur lehumra, a conversion process conducted as a “precautionary” measure to eliminate any uncertainty over a person’s Judaism.

Since the disengagement, Gangte’s family – now numbering seven souls – has lived in Nitzan, a religiously observant community of 3,000 on the southern coast that has absorbed hundreds of former Gush Katif residents, about 15 percent of them from Bnei Menashe. The family lives in a “caravilla,” a prefabricated mobile home subsidized by the government, until they find the time and energy to move to a permanent home in the community.

“Sometimes the kids compare life in Gush Katif to here,” he says of his five children, ages seven to 19. “In Gush Katif, there were almost no worries. We were content, in a world of our own.”

The fact that most residents of Nitzan’s caravilla neighborhood are former Gush Katif residents has made for a softer landing.

“We could have gone to Kiryat Arba, Ofra, Beit Shemesh,” Gangte says, listing other communities with large Bnei Menashe populations, “but that would mean leaving the community, and we weren’t prepared for that.”

In addition to his gardening work in and around Nitzan, Gangte was elected two years ago as cantor and gabbai in the community’s “new” synagogue – the one serving Gaza evacuees.

Gangte says he looks forward to building a permanent home in Nitzan, but is taking it one step at a time.

“There are bureaucracies, costs, permits – first you have to get settled into your caravilla, then get your job and livelihood back,” he says. “These things take time. Five years is nothing – we’re still not ready yet.”

Having been displaced twice in his life, Gangte has no intention of uprooting himself again. “I wouldn’t be any other place in the world,” he says. “This is home.”