Yishai: Falash Mura aliya to be resolved within a year 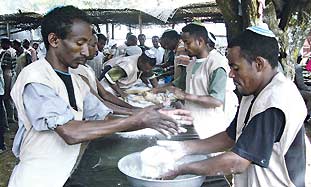 Interior Minister Eli Yishai pledged Monday to bring the aliya of the Falash Mura to its final phase within a year, and said that after Pessah ministry representatives would head to Ethiopia to check the eligibility of some 8700 descendants of Ethiopian Jews waiting to immigrate.

Yishai was speaking at a joint session of the Knesset State Comptroller’s Committee and the Committee for Aliya, Absorption and Diaspora Affairs, which was called to monitor the immigration progress of the Falash Mura community.

“This is an issue that is very close to my heart and I have been involved in it for many, many years,” Yishai told those gathered, including Knesset Speaker Reuven Rivlin (Likud), Knesset Members Shlomo Molla (Kadima), Uri Ariel (National Union) and Avraham Michaeli (Shas), State Comptroller Micha Lindenstraus, Jewish Agency for Israel Executive Chairman Natan Sharansky and former Supreme Court judge Meir Shamgar, who heads the Public Council for Ethiopian Jews.

“Within one year I hope that this issue will be resolved,” added Yishai.

“The Interior Ministry together with the Jewish Agency for Israel will go back and finish this work as soon as possible.”

Sharansky said that he supported the continuation of eligibility checks for the 8700 people in question and informed the committee that 75 new immigrants were scheduled to arrive in Israel on Tuesday night.

Even with the upbeat news, many of those at Monday’s meeting, including members of the Ethiopian community who still have relatives living in Gondar, voiced cynicism at Yishai’s promises. One young Ethiopian woman made an emotional plea to Yishai, begging him to bring the rest of her family to Israel.

“I am a very frustrated man,” expressed Molla, who visited Ethiopia in December heading a special delegation of senior Israeli officials to assess the situation in Gondar’s transit camps. “The State Comptroller issued a report [in September 2008] about how difficult the situation is there and even with that, nothing has changed. It seems there is a clear policy not to bring more Jews from Ethiopia, and no one is willing to explain why.”

After his trip to Ethiopia, Molla also reported that conditions for those in Gondar waiting to be checked for aliya is very poor, and in some cases even life-threatening.

MK Ariel also expressed concern over the situation, saying, “If we do not allow one group of Jews in the world to come to Israel then we are putting all Jews everywhere in danger.”

He added that the ultimate decision to wind up the Falash Mura story was “in the hands of the prime minister.”

“There will be no final decision on the matter unless the prime minister himself decides to wrap it up,” stated Ariel.

Indeed, for the past two months Yishai has attempted to bring a resolution on the Falash Mura matter before the government, but it keeps being postponed or taken off the agenda.

Chairman of the State Comptroller’s Committee MK Yoel Hasson (Kadima) called on Prime Minister’s Office representative Udi Praver to explain the position of the prime minister, who has repeatedly refused to comment.

Praver said that the Prime Minister’s Office supported bringing an initial 3000 people, most of who have already been checked for eligibility, but admitted that there was still a dispute surrounding the rights of the additional people, roughly 5000, to move here.

“He is against granting them eligibility automatically,” said Praver.

Despite the dissent from the Prime Minister’s Office, Joseph Feit, former president of the North American Coalition on Ethiopian Jewry (NACOEJ), which provides aid and resources to those waiting in Gondar and which has been actively lobbying the government on this issue, told The Jerusalem Post that he was encouraged by Monday’s meeting.

“I am delighted to see the overwhelming support for continuing the inspections of all 8700 people currently waiting in Gondar to immigrate and to bring those who are linked maternally to the Beta Yisrael Jews [from Ethiopia] as soon as possible,” he said.

Hasson was also positive about the assurances made by Yishai, but warned that he also expected to see clear progress within the next two months.

“If this is not solved within that time I will be forced to consider a parliamentary enquiry into this issue,” he said, pointing out several hurdles that could be considered by some as racist.

“I do not want to hear that this aliya is contingent on budget issues,” warned Hasson. “I have never heard of there being a financial condition placed on bringing Jews to Israel. The government needs to bring them if they are eligible and that’s it.”

Falash Mura are Ethiopian Jews whose ancestors were forcibly converted to Christianity more than a century ago. Under a 2003 government decision and following recognition of their Jewish heritage by Israel’s Chief Rabbinate, the Falash Mura are entitled to immigrate under the Law of Entry according to specific criteria. Many of those who have applied to come to Israel have close family members already living here.