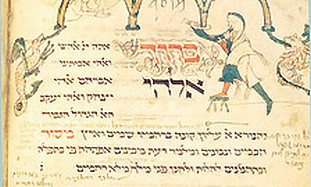 A Yom Kippur machzor translated for the first time into Portuguese will be distributed to Jews in Brazil’s Amazon.

The prayer book includes the traditional Hebrew text of the Yom Kippur prayer services, together with a transliteration and translation into Portuguese. It incorporates the customs and prayers of the Moroccan Sephardim, which were brought to Brazil in the 19th century by Moroccan Jewish immigrants.

Until now, Brazil’s Jews of the Amazon were inserting the special prayers into their own machzors as separate, hand-written pieces of paper, according to Shavei Israel, a Jerusalem-based group that helped publish the machzor.

“This machzor is really the first of its kind,” said David Salgado, project director for Shavei Israel, who moved to Israel from northern Brazil together with his wife and children. “It will enable Portuguese-speaking Jews who use Nusach Sepharadi to better recite and understand the meaning and significance of the Yom Kippur prayers.”

The prayer books will be distributed in Belem and Manaus in Brazil, where some 700 Jewish families live.