David “Ziggy” Marley, the son of famed reggae musician Bob Marley, is returning to Israel for two concerts: On July 19th at Tel Aviv’s Barby Club, and on July 21 at Jerusalem’s Sacher Park.

We caught up with him for a special interview two weeks ago, after his performance at the Couleur Café in Brussels before an audience of 20,000 people.

Ziggy Marley feels very close to Israel. He’s married to Orly, an Israeli woman, and they have three children: A girl named Judah Victoria, a boy called Gideon, and a baby – Abraham Selassie.

Marley admits that, having no other choice, he celebrates all the Jewish holidays and is very jealous of our culture.

“The history of our connection to the roots of Israel, to David, Solomon, goes way before I met my wife,” Marley says. “My father, my Rastafari culture, has a tight link to the Jewish culture. We have a strong connection from when I was a young boy and read the Bible, the Old Testament.

“The Rastafari culture has a very strong connection to Haile Selassie, a descendant of King Solomon. So it is in our soul, this connection, and we have had it for a very long time.” 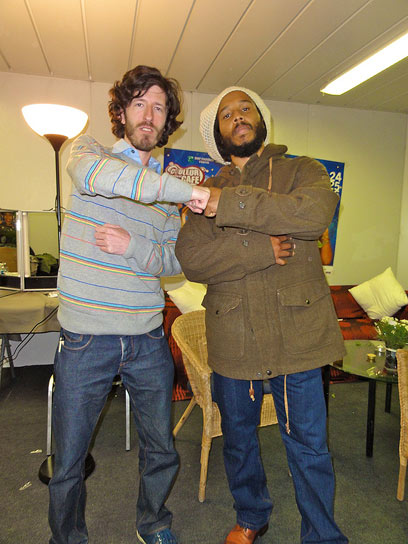 Several months ago, Marley entered the world of comics with a comic book called “Marijuanaman“, a superhero who gets his powers from the green leaves.

“The idea is to counterattack the negativity that society puts on the plant. The plant is very valuable to the world for medicine use, recreational use, industrial use, biofuel, fabric, making products from the plant that will help to stop deforestation. This plant is very important to the planet, very important, but we have neglected to use it.”

Ziggy is coming to Israel following the release of his new album, “Wild and Free,” last month. The album was produced by Don Was, who worked with the Rolling Stones, Bob Dylan, Elton John and others.

One of artists who will take the stage before Marley in Jerusalem, as part of the Road to Zion festival is Israeli singer Muki, who joined us in Brussels.

“All the members of this family sing and create and preserve Bob Marley’s message,” Muki says. “Today, musical legends created in the modern world quickly become clichés and money machines which empty the message. In the Marley family, the entire issue of the message passes through all the children, led by the eldest son Ziggy.

“Clearly, the new and interesting voice in the family today is Damian and Stephen, but Ziggy still leads the way.”