Purim is all about the hiding. Esther hid her identity from King Ahashverosh. Haman hid his evil side from the King. And as our tradition teaches, the name of God does not appear in the written account of Purim, because even God is hidden in the Purim story.

As a result, Jews have a custom of wearing costumes on Purim. Dressing as Darth Vader or as Harry Potter gives us a chance to either give voice to a part of ourselves that might be hidden on more typical days or conversely the costume might hide away parts of ourselves that we prefer not be seen.

Hiding carries over into Purim foods as well. Across many cultures, Jews developed customs of eating foods that had a surprise hidden inside. These foods pick up the theme and remind diners that there is usually more than what we see on the surface. Like the costumes, these foods remind us not to assume too much from what we see on the outside, because there may be a bigger or more important truth hidden just out of sight.

This Purim truth about identity is one that is relevant year round. We should not make assumptions about people based on their skin color or ethnic identity. We should make the effort to see what lies below the surface because like Purim foods, there are likely to be some wonderful surprises.

This Purim you can cook up a global feast of hidden culinary treats that not only put a smile on people’s faces but make them think. Ask your family or friends to share in a meal that draws on tradition but also invites conversation. We have included some questions for discussion with each food suggestion.

Though not all the foods on our Hidden Foods Purim menu are traditional for Purim, they are global Jewish food, and will be a welcome addition to the Purim table. Make one, some or add your own!

Soup with Kreplach: Kreplach are a traditional Eastern European Purim food. Similar to the more familiar wontons, these soft dough dumplings are white on the outside but contain a meat center. Kreplach are usually served in clear chicken broth. The wrapping is bland but the filling is loaded with flavor and adds so much to the taste of the soup.  Question for conversation: Was there ever a time in your life when you hid a part of yourself? Why?

Tortellini: Today this well loved Italian food is easy to find on restaurant menus or to pick up at the supermarket and make at home. But in earlier times, making tortellini meant carefully rolling out and filling small packets of dough, a big project reserved for special occasions. Italian Jews went through this effort for the feast at Purim to give tribute to Esther and her hidden identity. Question for conversation: Do you think it is okay for leaders to hide parts of their identity? Why or why not?

Burekas: These flaky pastries are eaten throughout North Africa and the Middle East by Jews, Christians, and Muslims. Depending on the season and the place they are filled with everything. Vegetarian burekas are popular and options abound, spinach, mushroom, and potato are common. For meat meals, ground meat might hide inside, at milk meals cheese. But beware, you can’t tell from the outside what type of filling is on the inside. Though not specific for Purim, they are easy to make and fun to eat. Question for conversation: Have you ever made an assumption about someone based on how they look only to find out later that your assumption was wrong? What did you assume and why? 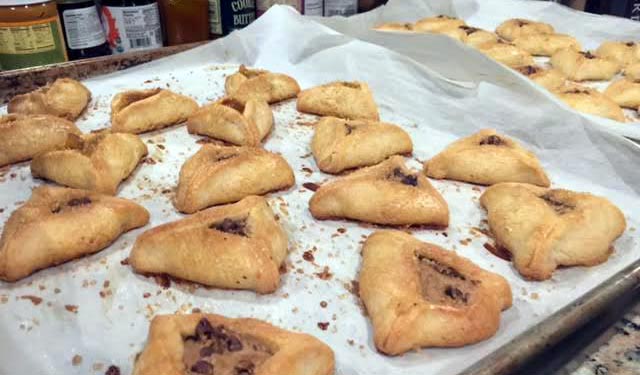 Hamantaschen: These the most ubiquitous of the hidden Purim foods have their origins in Germany where a pastry called Mohntaschen is popular year round. The name of the pastry translates literally as poppy seed pocket in tribute to its triangle shape and its filling. Riffing off of the sound of the name, German-speaking Jews adapted this treat for their Purim celebrations. Over the years Jews around the world have adopted the custom of making similar pastries filling them with everything from Middle Eastern halvah to South American dulce de leche. Question for discussion: Was there ever a time when people assumed something about you because of your name? Or when you assumed something about someone because of their name?