Jessica Stern is the co-founder of Ikku, a company that helps Colombian and Guatemalan people who have been victims of political violence heal and earn an income through artisanal crafting and tallit weaving. The Be’chol Lashon Team recently chatted with Stern about growing up in Colombia, her inspiration for creating Ikku, and how she ties it all to the Jewish value of tikkun olam. Below are edited excerpts from the conversation.

Tell us a bit about yourself. Where are you from? 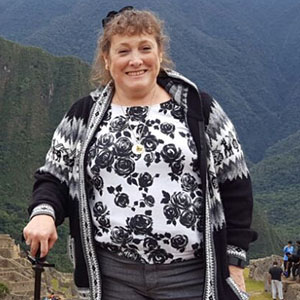 The short answer is, I was born in New York but grew up in Colombia. For some people, that is enough, since it explains my accent. For many people, not being able to place my identity elicits a lot of questions.

My mother was born in Germany in 1935, not a great time to be born Jewish in Germany.  My mother and her family left for France shortly after she was born. France became occupied by the Nazis, and again they fled. They were able to board a boat in Africa headed to South America. They stayed in a displaced persons camp until they received refugee status in Colombia. My mother eventually became a Colombian citizen. She later studied in the U.S., where she met my father. We moved to Colombia when I was 2 years old.

What was it like growing up Jewish in Colombia?

Colombia’s Jewish community was pretty small but well established. We became members of the “German Synagogue.” Like many Jews I went to Jewish Day School for my primary education. Even though it was a small community I was mostly surrounded by Jews all the time: at school, synagogue, Bar Mitzvahs, weddings and other social events. My friends were the children of my parents’ friends and were all Jewish. I’m not Colombian by birth and have no Latin blood but even so, I was immersed in the culture of the country, its food, music, and traditions. Through daily life, school, travel, work, I came to know and love this country.

Why did you decide to leave?

Before I moved to the U.S., I would always say, “Bogotá is my home, there is no place like it, here I will live and here I will die.” I had to leave with my family due to the increasing violence. I wanted my children to have a childhood that didn’t require them to live in fear. Living in Bogotá, we had not faced the same level of risk as the people living in the conflict areas. I had the means to make the choice to leave.

What inspired you to found your crafts business?

I took a trip to Quebec City with my family. We came across a store that sold Colombian artisan crafts. I love Colombian crafts. I thought to myself, if I ever started a business, a Colombian crafts shop would be my dream business. At the time I wasn’t a business person; I was a therapist. Consequently, this dream sat on the back burner for a long time. Sometime later my dear friend and co-founder, Karen Fleisacher, mentioned that she wanted to start a business making tallitot with Guatemalan textiles. I’d recently relocated to Atlanta with my husband and was looking for a new direction, something different yet meaningful. So naturally I thought maybe it was time to pursue that dream I had many years before of opening the Colombian craft store. So we co-founded Ikku.

How did you come up with the name Ikku?

When Karen and I were thinking of a name for our business, we tried out different options.  When we were visiting the artisans in San Juan La Laguna, Guatemala, we happened to stop at a place where we were given our nawals. A nawal is a Mayan sign that shows you what characteristics you are likely to have, like a zodiac sign. We got our own and those of our children. Ikku came out of taking a letter from each of our children’s nawals. Of all the options we had come up with, it seemed to be the best since it was short, easy, and catchy.

How have you drawn on your Jewish identity in your work?

I want to do things that will make a difference. Ikku integrates who I am and what I believe in. If I tried to figure out what the most important aspects of my identity are, my Jewish identity is very central. The rituals are important. I keep Shabbat, I make challah, and as the matriarch of my family, I host a Passover seder in my home. Yet more important are the values. To me tikkun olam is an important Jewish value. I’ve spent most of my life in service to others because I want to help make a difference in the world.

What do you and Karen hope to achieve with your business?

Ikku is so much more than a business. It is tied to all of those parts of our identity: Jew, Colombian, woman, mother, friend, American, Guatemalan.  It is a reflection of our pride in who we are and how we came to be where we are. It’s a reflection of our values, of our commitment to the multiple communities we are part of, and of our hope that we can contribute to make our little slivers of the world a better place.

When I hear people talk about Colombia as only a place full of problems, I worry they don’t see the whole picture. Colombians are creative, they are hard working, they are kind. Karen and I want people to experience Latin American culture in a different way, apart from the violence.

Another goal of Ikku is to help the Latin American artisans have access to more choices. The biggest barrier to choice for these people is poverty. When we started Ikku we wanted to pay people fairly and work directly with the artisans. We don’t ask for discounted prices. We pay what they ask. We want to make sure they get out of poverty, and hopefully they will be able to. We want to do it in an ethical way that lifts everyone up.