Sea Turtles: On a San Francisco stage, Three Generations of Jewish-French-Tunisian Women Are Looking for a Beach

SAN FRANCISCO — GenerationTheatre will stage its original play, Sea Turtles, on two weekends from November 2 to November 11, 2012 at the Southside Theatre, in Fort Mason. Curtain time is 8:00pm on Friday and Saturday and 3:00pm on Saturday and Sunday. 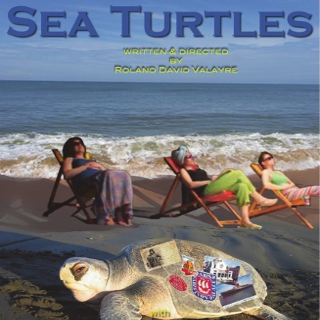 In July 2012, François Hollande, President of the French Republic, made long overdue apologies for the deportation of French Jews, by the French authorities, to Nazi extermination camps in 1942. In Sea Turtles, French-born author and director David Valayre builds on the tribulations of his mother, grandmother and aunts, Berber Jews from the mountains of North Africa, who emigrated from Tunis to Paris at the worst possible time: 1938. “They avoided deportation by escaping occupied Paris and clandestinely returning to Tunisia with dcuments bearing Arab names ‘officially forged’ by the Tunisian authorities,” says Valayre.

Sea Turtles is about the wanderings of such women, both through time and space and through their own feelings — daughters, sisters, mothers and grandmothers, shuttling between Tunis and Paris over the second half of the Twentieth Century. “Sea Turtles is a story of love given and love denied” says Valayre, “and, fortunately, it is a comedy.”

Like GenerationTheatre’s previous San Francisco productions (4Soldiers in 2008, DiTCH in 2009, BooKKeepers in 2010, and Audition in 2012), Sea Turtles challenges the notions of chronology and distance. Seven actresses interpret four characters at different ages; Tunis, Paris, a beach, a garret, a train and a road are evoked simultaneously on a single stage. Paris 1942 talks to Paris 1968. A grandmother sees the younger woman she once was. Dreams are intertwined.

“This is realistic theater because that’s exactly what happens in reality. The Paris of 1942 is present in the Paris of 2012; this is why President Hollande’s apology for the 1942 deportations are so important to France today. The characters in Sea Turtles live with their younger selves and with the deeds of their elders. Their past doesn’t devour them, but they can’t stop it from nibbling at their present,” says Valayre.

The women of Sea Turtles are looking for a beach they lost or never knew “just as we 18-year olds were looking for a beach under the cobblestones of chaotic 1968 Paris,” says Valayre. They are searching for their own identity. “Call your brothers by their French names,” says one of the characters, “David, Salomon, those are your father’s choices. We’re in France now; we don’t want to stand out. From now on, it’s Clovis and Charlemagne.”

Preview trailer of the 2011 production: https://bit.ly/SeaTurtlesVideo

Generation Theatre is a non-profit ensemble company, which grew from the friendship of a group of theater students at the Berkeley Rep’. The troupe enjoys tackling a diversity of subjects and styles in original productions, from a father’s introspective search for love (4Soldiers) to the magical revisiting of relationships (DiTCH), or the fictional prolongation of Kafka’s life (BooKKeepers) or of an old theater (Audition). https://generationtheatre.com/